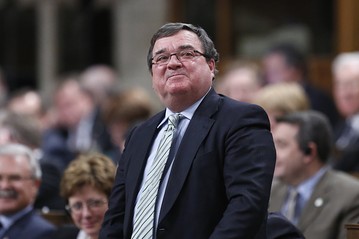 As far as Canadian Finance Minister Jim Flaherty is concerned, talk of a Canadian housing bubble is overdone.

That’s not so, according to Mr. Flaherty’s testimony Wednesday night to a committee of the Canadian Parliament’s upper chamber, or senate.

Mr. Flaherty told senators Canada’s real-estate market is softening, especially in the condominium market – which he cited last year as reason enough to tighten the country’s mortgage-financing rules – but says that isn’t a bad thing.

“This is a good thing,” Mr. Flaherty said of the cooling housing market, which is proving to be a drag on Canadian economic growth. “I see some people worrying about it, but we don’t have a bubble. If we had failed to take some action, we would have had a bubble.”

Still, Mr. Flaherty — the longest serving finance minister among Group of Seven countries — acknowledged there is a risk of asset bubbles popping up, telling Canadian lawmakers he’s worried there’s too much capital “sloshing” around the global economy.

For instance, the Dow Jones Industrial Average has advanced nearly 25% on a year-over-year basis, while the benchmark stock index in Japan — where the government is undertaking a bold, aggressive easing policy — has surged over 66% in a six-month period.

Prior to his senate testimony, Mr. Flaherty told legislators in Canada’s lower house, at another round of committee testimony, that there’s a tense debate among G-7 policymakers regarding which policy is best: more stimulus or more austerity.

He said some of the G-7 are eyeing policies that would encourage more spending, lead to bigger debt levels and “perceived economic growth,” before adding: “There are those of us who feel the correct balance -which we tried to do in the budget this year – which is to move continually toward balanced budgets while stimulating the economy.”

Nevertheless, Mr. Flaherty said he still harbors worries about how the government-owned mortgage insurer, Canada Mortgage and Housing Corp., is operated, adding it needs to be run more like a private-sector lender.

Today you can afford just about anything if you don’t have to pay for it right away.

You can’t fault Canadians for not doing the right thing

Should it really come as a surprise that the car industry has rebounded sharply from the bankruptcies of the last recession? The recovery has been built on debt, and car loans are now as long as 96 months or eight years. A report from credit agency Trans-Union says personal debt, excluding mortgages, is back at an all-time high thanks to car loans.

Somehow in the middle of this debt debacle we are told we need to start saving money. A report from Bank of Montreal released Thursday says we need to save 9% of our income per year to meet retirement goals but we are lagging in the 3% to 4% range.

Car loans drove Canadians to record debt in the fourth quarter of 2012 as the pace of consumer borrowing began to pickup after a brief lull, according to a TransUnion survey released Tuesday.

“The problem is the incentive [to save] is not there right now with rates the way they are. The incentive is to borrow and it’s a problem,” said Robert Kavcic, senior economist with BMO and one of the authors of the report.

“You can’t fault Canadians for not doing the right thing.”

Those low rates helped create a housing boom that Ottawa has taken great pains to slow down by restricting lending in an effort to create a so-called soft landing instead of a U.S. style crash. The impact of longer loans on cars is much the same as it is on houses, a lower monthly payment that ultimately allows you to buy more.

“It gets the payment down,” said Mr. Kavcic, who adds the concern is that rates begin to go up. “Debt levels are high relative to income but if you look at the affordability of that debt, it’s a bit more normal.”

It’s no surprise this longer loan game has worked its way into the car market. Who really saves for a car anymore? It’s all about the monthly payment for most people buying a vehicle. Canada Mortgage and Housing Corp. says your total monthly debt should not be more than 40% of your income, so keep that in mind when you commit to that huge car payment.

Want a $200,000 Porsche? No problem. “There is often no down payment required to purchase your Porsche. Many initial costs can be included in your finance contract,” the company advertises on its web site.

Using the promoted 84-month term from the luxury car manufacturer and you could get your monthly payment down to $2,733.76 based on an interest rate of 4% with no money down. Reduce that to four years, the old norm for car loans, and your monthly payment skyrockets to $5,904.80 based on 4%.

The real story in the fourth quarter credit report from TransUnion was how much loans for auto captives have grown. The average Canadian consumer had $19,345 outstanding in auto loans in the fourth quarter, about a 9% jump from a year ago. During the same period installment loans — which have a set due date and include car loans provided by banks — jumped 6.7%.

“Once the recession ran its course, the banks got more aggressive, getting in that [auto loan] business before the auto manufacturers got back in that game,” said Thomas Higgins, vice-president of analytics and decision services at TransUnion.

The car companies are back for sure. At the corporate level, the auto industry helps dealers move the products off the lot by stepping in with long-term, low-cost loans with rates as low as 0.9%, the cost of the cheap money coming out of their profit not the dealer selling the car.

Mr. Higgins likens the Canadian auto market to the U.S. housing market because it usually has cheap up-front money in the form of auto leases. Consumers, who typically go over their allotted mileage and face a major bill as their lease expires, convert that lease into a new loan and lower the monthly rate by extending the time frame of the loan.

You have people who were not really ready for the housing market and now we are doing the same thing for the car market
“It’s like when people in the U.S. had the interest rate go up on them and were stuck with this big bill,” said Mr. Higgins referring to the practice of teaser rates which went up as much four percentage points after the initial window.

Dennis DesRosiers, president of DesRosiers Automotive Consultants, said last year car sales in Canada were up 6% and the second best on record. He says 2013 may set an all-time record for sales.

Mr. DesRosiers says when the leasing market dried up during the credit crisis, consumers were forced to start borrowing to buy their car and longer loan periods became standard. He says 60 to 72 months has become the norm for loans even though the average new-car buyer owns the vehicle for just eight to nine years.

“They go quite far to qualify you to buy a car,” said Mr. DesRosiers, with a chuckle. “[Helping you to qualify] is one of the reasons amortizations went up but the primary reason they are longer is it allowed the banks to compete with leasing market.” Banks are not allowed to lease cars so to get lower monthly rates comparable to leases, they pushed out the loan period.

Scott Hannah, director of the Vancouver-based Credit Counselling Society, said nobody thinks about how much the consumer pays in the long run. “The interest? It’s all about the payment. Is the auto industry the new bubble? It’s very similar to housing market when it extended the amortization out.”

There is at least one key difference. High-ratio home loans require mortgage default insurance which is backed by Ottawa. Car loans are not backed. Then again, the government has shown it is willing to bail out the auto sector.

“You have people who were not really ready for the housing market and now we are doing the same thing for the car market,” said Mr. Hannah.

If you are a consumer, why would you say no? On the surface, it looks like you are buying something with somebody’s else money.