Someone coined the word “Hongcouver”, I supposed it cannot be considered as a nagative term, since it is merely suggesting Vancouver has been “Hongkong-ised” as far as real estate prices are concerned.

Maybe not a bad thing.

Vancouver and Toronto must be the only place in North America where every detached home owner is a millionaire, or potentially is one.

Welcome to the Millionaire Club.

No, I am not one. I am just the doorman for now.

Rising real estate prices in Vancouver are helping to increase market confidence, but are leading to housing becoming even less affordable, RBC announced May 27.

According to the bank’s Housing Trends and Affordability Report, the percentage of pre-tax income that the average Vancouverite needed to service the costs of owning a home in 2014’s first quarter has increased overall.

The report also said that home resales fell 6.5% in the quarter, which is 8.5% below the ten-year average.

The only home type that became more affordable was condos, with owners spending 39.9% of pre-tax income – a 1.0 percentage point dip.

“With prices back in growth mode, the improvements we’ve seen in Vancouver’s affordability levels over the last two years will be difficult to replicate.”

Affordability also fell across the province as a whole. The average British Columbian must spend 68.4% of their income for housing – up 0.9 percentage points compared with Q4 2013.

Chip Wilson, former CEO of Lululemon, has finally completed his home in Vancouver’s waterfront Kitsilano neighborhood. The elegantly designed concrete dwelling took five years to complete, and attracted  attention even before it was ready to move in. In August 2013, Wilson hosted a private birthday party at his unfinished house that featured live music by The Red Hot Chili Peppers. 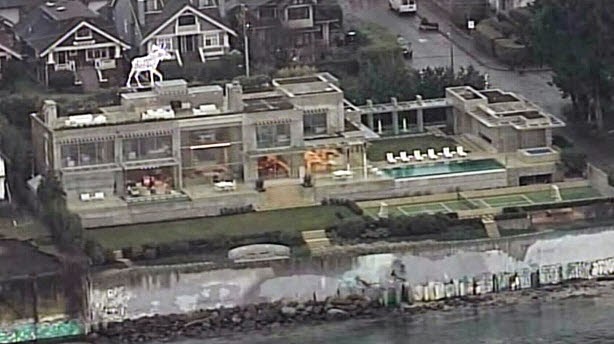 While still unfinished, the house at 3085 Point Grey Road in Vancouver was ranked as British Columbia’s second most expensive residence. Now that it’s completed, its appraised value tops $54 million, officially making it B.C.’s most expensive single-family piece of real estate. The neighborhood also boasts the third, fourth, sixth and seventh highest valued properties in B.C.. Chip and his wife Shannon, together with their five children, will enjoy a light-filled lifestyle in this 30,600 square foot home. Stretching over three waterfront lots, the home’s two stories include seven bedrooms and nine bathrooms. 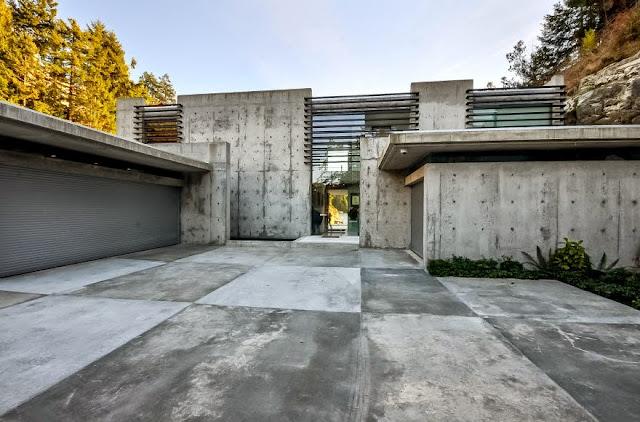 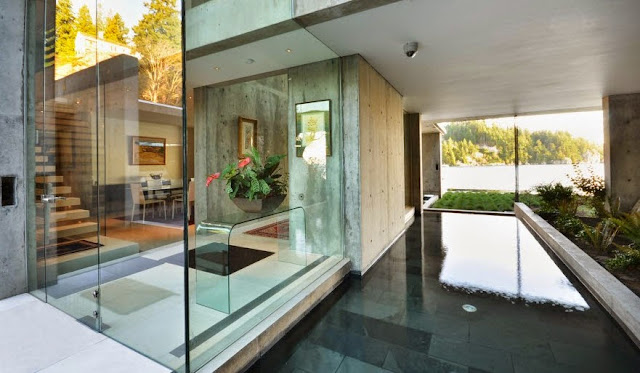 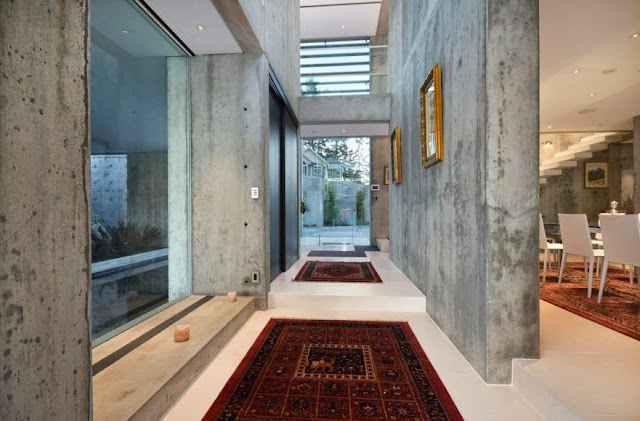 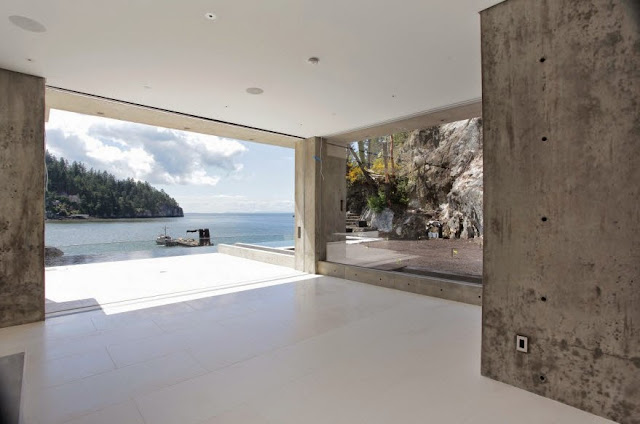 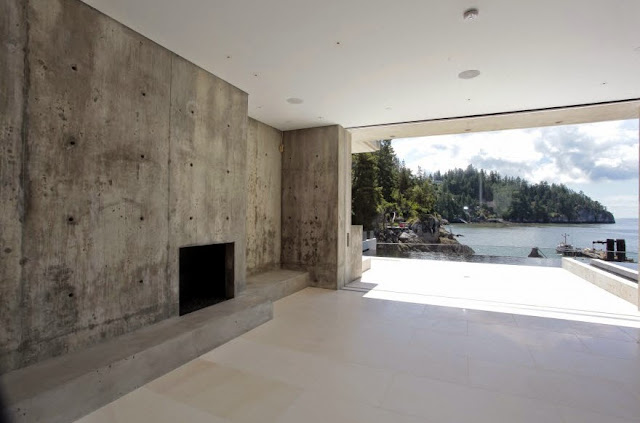 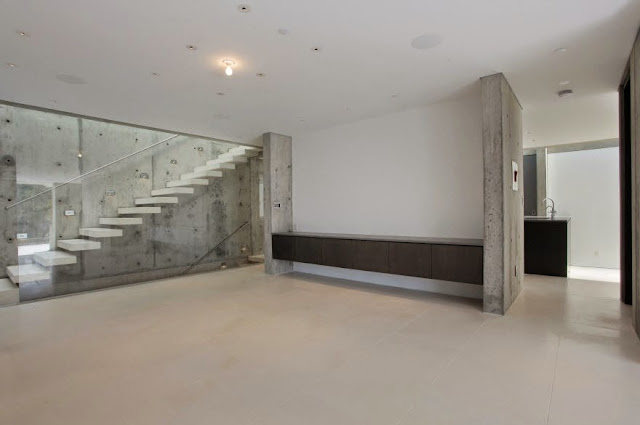 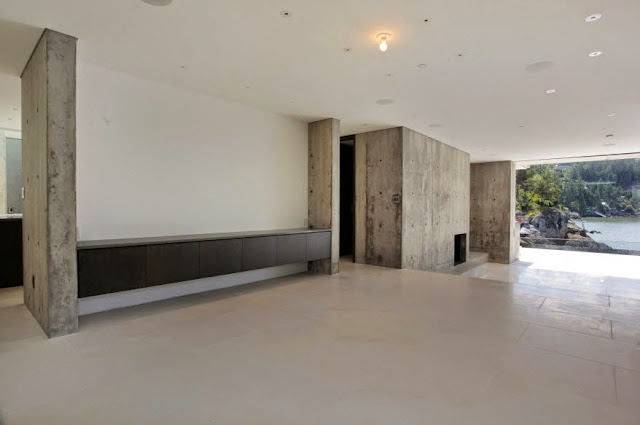 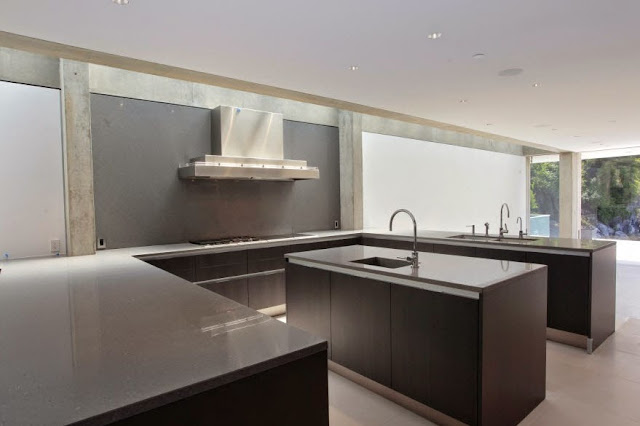 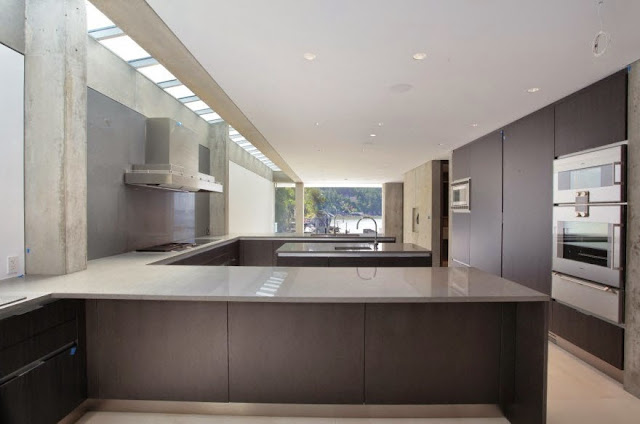 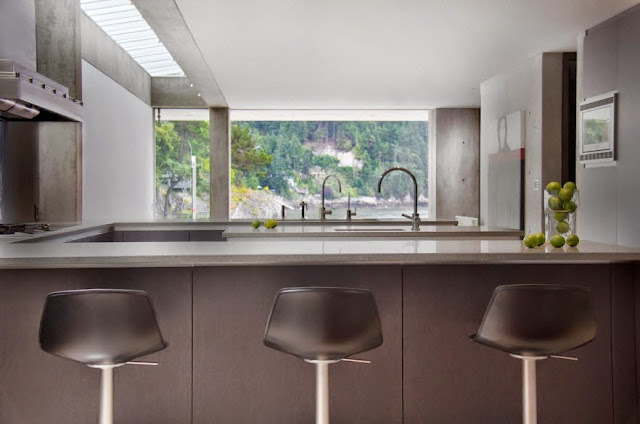 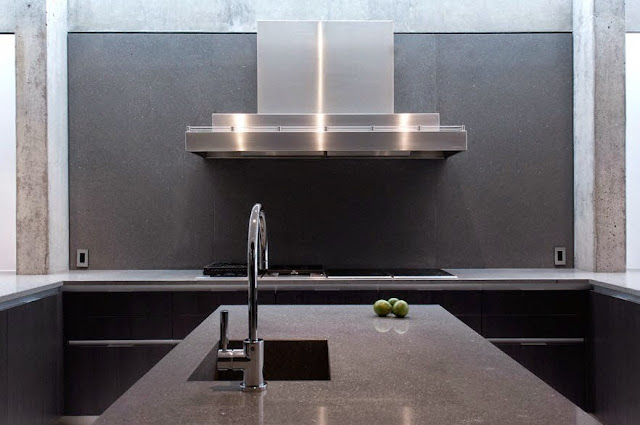 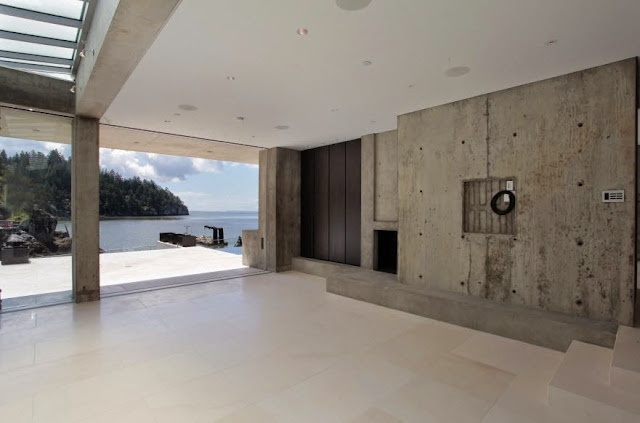 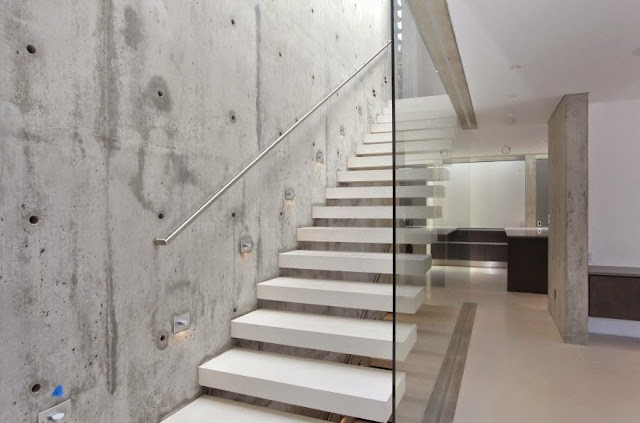 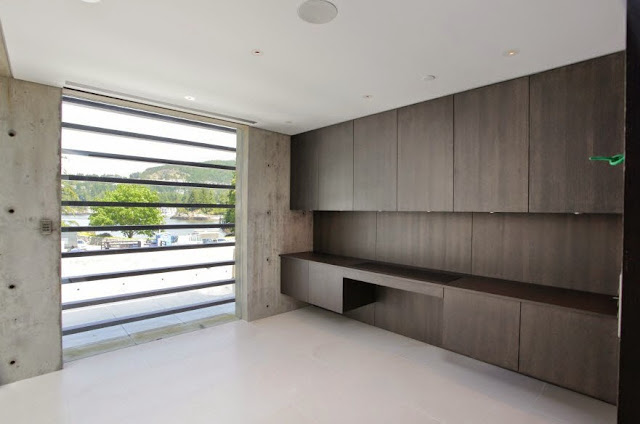 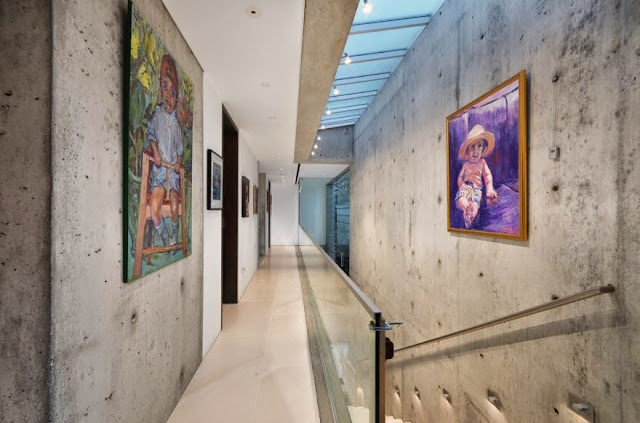 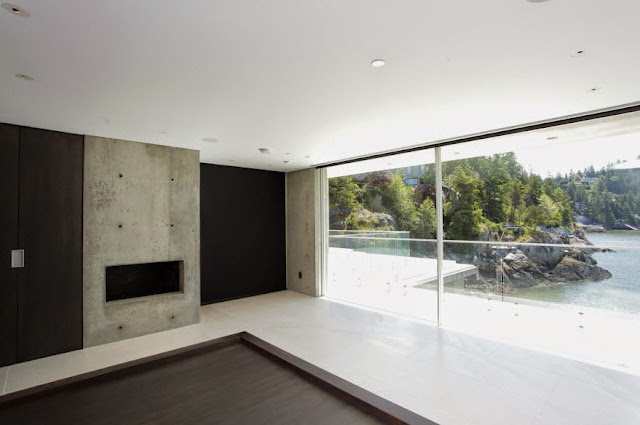 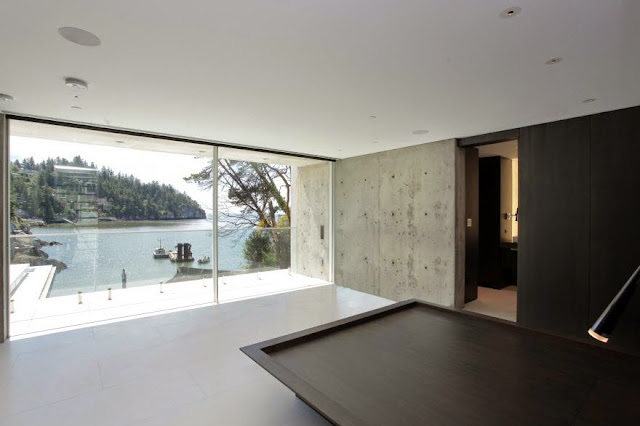 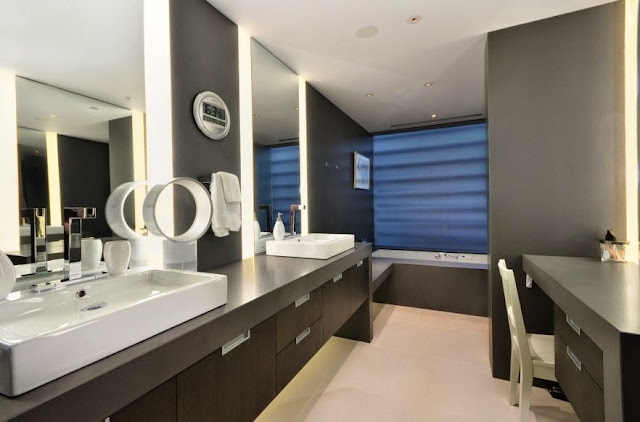 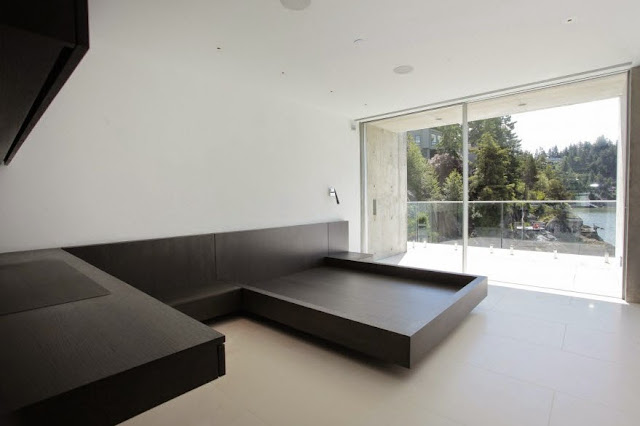 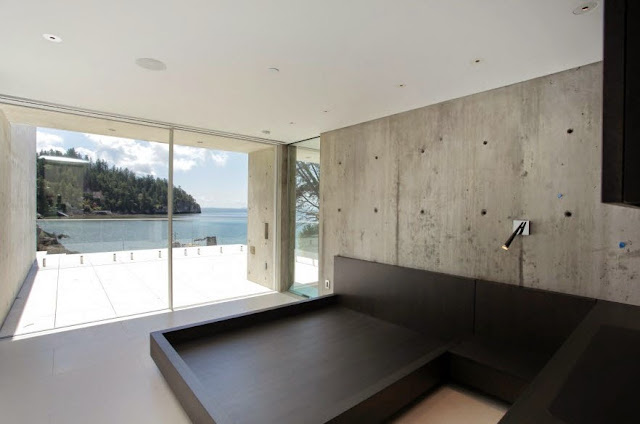 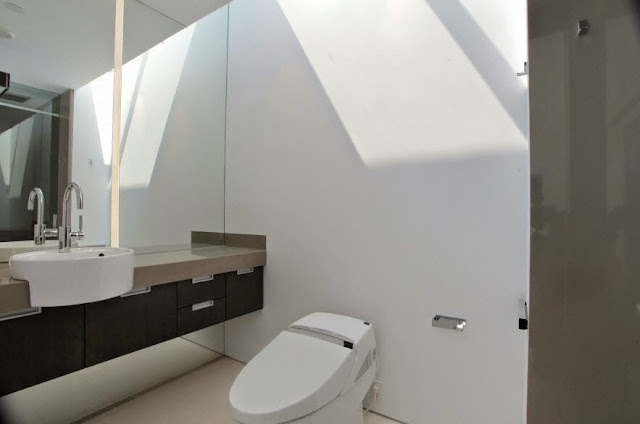 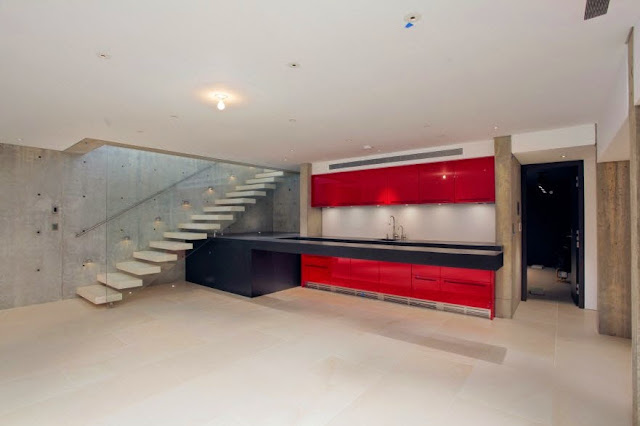 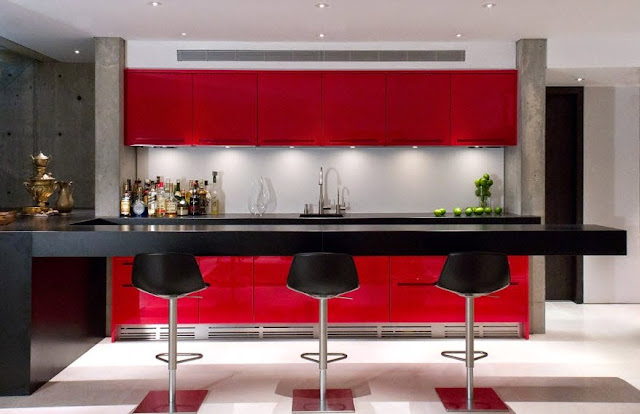 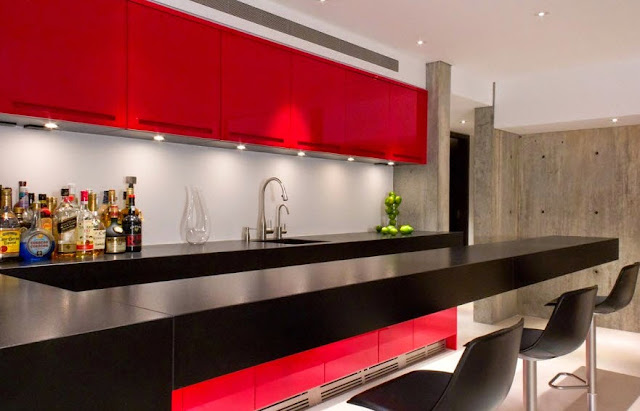 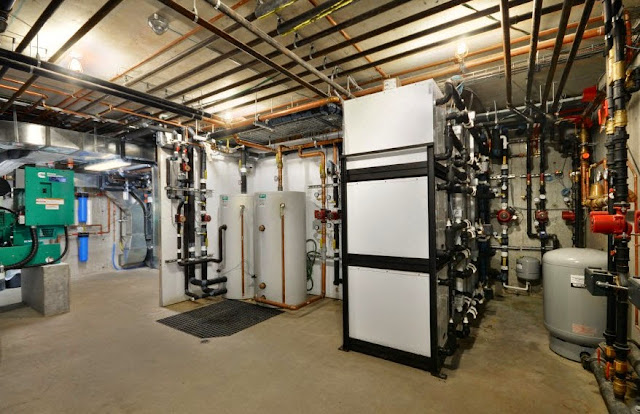 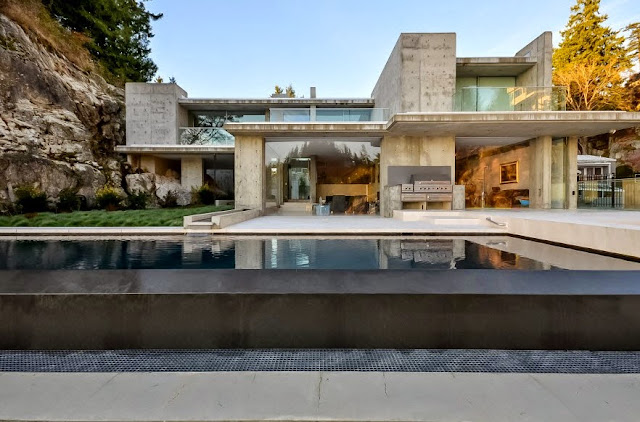 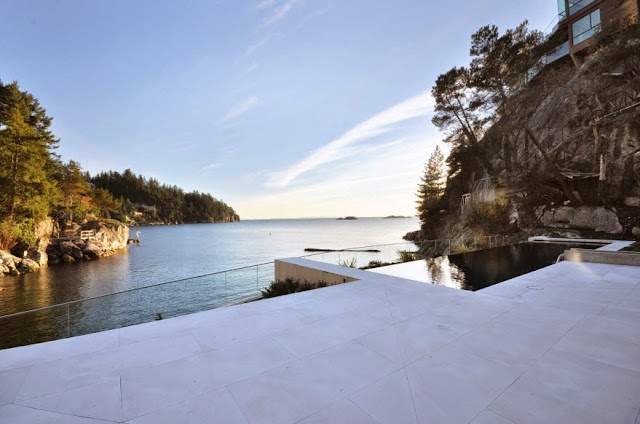 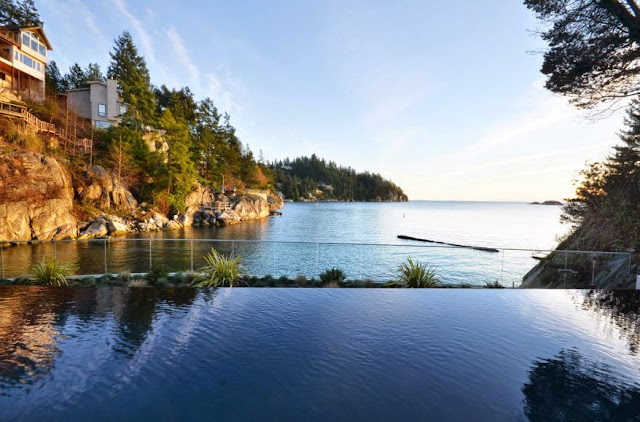 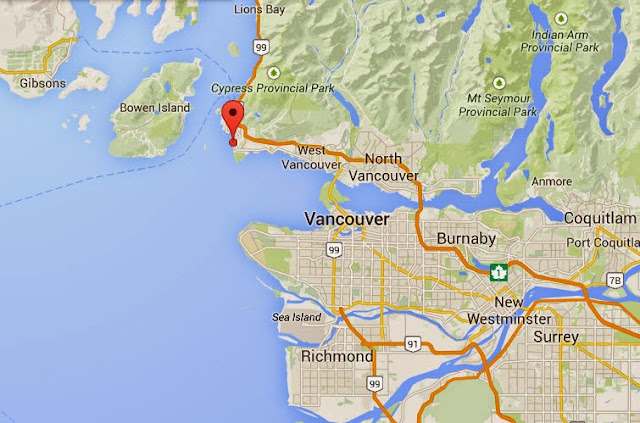 Measured Architecture of British Columbia is the firm which undertook the expansion and renovation of an existing house and put the finished product on the architectural map. Indoor and outdoor infinity pools carry the eye out across the sheltered waterways of Vancouver, and across to the smoothly curved North Shore mountains in the distance. The unfussy architecture is well-suited to the Pacific Northwest, matching the coastal region’s austere grey and blue-green palette with limestone and black painted steel.

A HOME CONNECTED TO NATURE

The many window walls are controlled manually, so that the house feels as if it is a continuous part of the waterfront landscape. The architects worked to incorporate traditional materials into controls for these walls, even adding whimsical touches inspired by vintage cars. The dining room table is positioned so that almost every diner can gaze out at the water from where they sit, while the indoor swimming pool features a playful bright red statue of a harbor seal. The actual animals themselves are common in the British Columbia waterways, visible through the many glass walls. Intimate outdoor spaces are created by clusters of dense greenery surrounding small garden spaces, which provide areas for family life. At night, the outdoor pools reflect the lights and structural lines of the house, creating new layers to the visual experience.

After a profitable and occaisonally controversial career in creating Lululemon, Chip Wilson and his wife look forward to the luxury of settling into their home and supporting local artistic and environmental causes. Their home will undoubtedly provide them with plenty of inspiration in these areas.