Housing Prices in Real Terms: Canada vs the G7. Canada leads all. 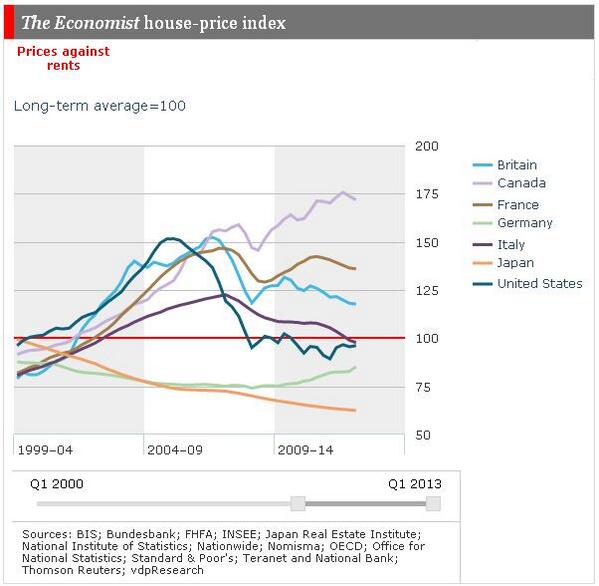 Once a growth leader among big industrialized nations, Canada’s reign at or near the top may be coming to an end, says a new forecast from Capital Economics.

The projection, issued Tuesday, calls for the economy to advance by 1.5 per cent, followed by an even softer 1.0 per cent in 2014, as the country’s over-built housing market moves from soft to crash landing.

That would likely put Canada behind the U.S., Japan and possibly Germany — among the G7 countries — in terms of growth in at least one of the years.

Capital Economics analyst David Madani, who wrote the report says, given the under-performance, he expects the Bank of Canada will keep interest rates at current super-low levels until late 2015.

The new outlook runs directly contrary to how the Bank of Canada — and many private sector bank economists — view the economy and housing unfolding.

While the central bank sees growth accelerating in the July-September period this year and continuing into the next two years, Capital Economics predicts the opposite scenario, with the second half of this year squeezing out a mere one-per-cent growth rate. The slow pace extends through to 2014, then picks up to two per cent in 2015.