TD Bank report says 70,000 new condo units will be completed in 2014 and 2015, a “striking” total that’s double the historical average.
“Toronto’s skyline of cranes is now about to transform into a skyline of condo buildings,” TD says.

If you’re shopping for a high-rise condo in Toronto at the moment and your agent has your best interests in mind, he or she may give you just one piece of advice: wait.

A new report from TD Economics published Monday takes a deeper look into the condo boom occurring in the country’s most populous city and backs up what some have been saying for some time.

Prices are headed for a correction.

By how much? TD’s call is for an eight per cent decline in prices by the end of 2015. The average condo price in the Greater Toronto Area sits at $353,665, according to the Toronto Real Estate Board.

A pullback of that magnitude could spell some meaningful downward revisions on prices on brand new units coming up for sale later this year or next.

But a reduced price on a new condo is also a potential harbinger of a broader hit to the economy. Experts says a pronounced downturn in Toronto’s condo segment could have farther-reaching effects on the regional economy and beyond.

With tens of thousands of jobs in construction and financial services tied to the market, the Bank of Canada has specifically cited Toronto’s inflating condo sector as a potential source of concern.

TD is basing the fresh assessment on the fact that a whopping 70,000 units are set to be completed this year and next – a number the bank calls “striking” — at a time when buyer demand for new units already appears to be “dwindling,” the bank said.

“While a majority of these units have been sold, roughly 9,000 of the units remain to be absorbed,” the report said.

But even among sold units, some suggest an unknown number of owners or investors are facing challenges when it comes time to securing a final loan to close the deal and take ownership.

There’s some emerging (if anecdotal) evidence that some buyers who put down a small deposit a few years ago on a yet-to-be built unit are now facing unforeseen problems securing a loan to cover the remaining balance now that lending conditions have tightened.

“They put their deposit down four or five years ago and then they’re ready to register the unit and get a mortgage and they’re walking into tough times,” a Toronto broker told industry website Mortgagebrokernews.ca last month.

No idea. There are disputes that say no such thing. There is always one condo for one buyer …  More http://globalnews.ca/

Why buy a condo when you can buy a house for the same money ? Yeah, right … 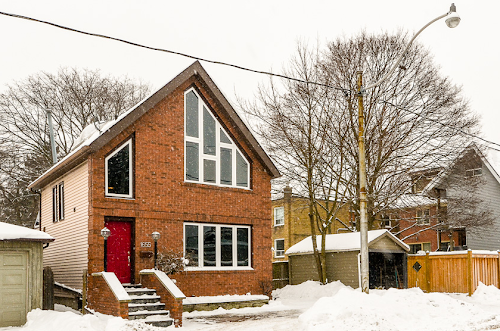 How have I never noticed this place?It is definitely unique.  There is something very church-y about it, but I don’t think that was the look they were going for.  I think it was just supposed to be a lot of window.

The listing says that it is fully reno’d, but I think that reno happened a while ago.