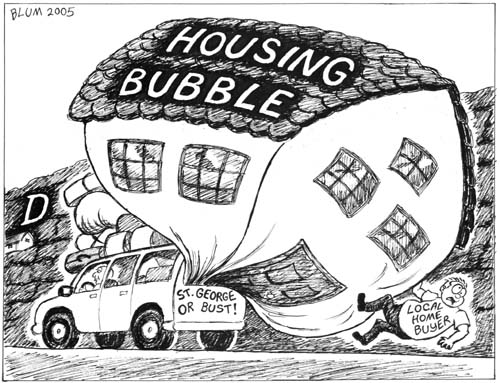 David Madani, economist with Capital Economics, said on Wednesday that Canada’s housing market is currently experiencing what appears to be a soft landing, but is, in fact, a bubble in the process of bursting.

“There is always a stand-off period at the end of a housing bubble, when prospective buyers refuse to meet the price of sellers, who refuse to drop the asking price,” he said in a note. “Eventually it begins to dawn on sellers that the market has shifted and, as they become more desperate, they eventually agree to lower their asking price. But until that happens, any stagnation in prices can be misinterpreted as a successful soft landing.”

Mr. Madani said that he expects housing prices in Canada to crash 25% over the next couple of years. He originally made that forecast in June of 2011 and reaffirmed it Wednesday. His update follows a report from the Royal Bank of Canada, the country’s largest mortgage lender, that said that Toronto’s red hot real estate market is not a bubble.

In that report, RBC’s senior economist Robert Hogue said that demand in Toronto is in line with supply, dismissing claims that a condo bubble has emerged in the city.

A flurry of speculation has emerged about the fate of Canada’s housing market following changes to mortgage lending rules recently. Last month, Finance Minister Jim Flaherty changed the maximum amortization period for a mortgage from 30 years to 25 years. Those changes, combined with the prospect of looming interest rate hikes from the Bank of Canada, have raised questions over the effects they will have on Canada’s housing market.

Mr. Madani said that the changes will affect first-time home buyers the most, who make up 50% of new home sales and a quarter of resales.

Housing prices typically respond to changes in the market with a lag of five to nine months, according to Mr. Madani. He points out that home sales have already seen material declines, down 4% over the last two months. Vancouver in particular has been hard hit, with sales down 28% year-over-year.

“Overall, the willingness of buyers to pay these historically high house prices now looks to be proving fragile against the increasingly disappointing macroeconomic backdrop,” he said. “The housing bubble in Vancouver already appears to be deflating, with only Toronto defying the inevitable. Accordingly, we expect substantial declines in house prices over the next year or two.”

To Download eBook – go to www.positiverealestatecoaches.com.au Australia economy fundamentals are strong due to low unemployment and infrastructure investment. Capital injection in to the mining market is a once in a decade opportunity so the trick is to buy real estate where there is a strong workforce. To find out these optimal real estate markets