CBC asks if the housing bubble will pop as a result of tightened capital controls?

This month, the limit on foreign currency transactions in China was lowered to $9,000 to increase scrutiny on investment money flowing out of the country. Promoting some to fear this could be the catalyst that finally causes Canada’s bloated real-estate prices to collapse.

Obviously there will always be support for  real estate in Canada … forever expanding till the end of time (just our universe).

“International shoppers are ‘relatively minor players’ but there are a lot of other things going on in the Vancouver, Toronto, Seattle or San Francisco housing market that have continued to propel housing prices upward,” said senior economist Aaron Terrazas, of Zillow, a real estate market research company based in Seattle.

But what if buyers from China stop investing?

In January, new rules were created to curb the exodus of money overseas … only $65,000 per person is allowed in foreign transactions a year. On July 1, regulators dramatically lowered transaction limits to $9,000 before they must be reported to banking regulators.

It will have an effect, but it won’t be catastrophic, says Anne Stevenson-Yang, of J. Capital Research Ltd., She says the new controls are aimed at stopping “ants moving house” a Chinese term for getting a lot of people to make small money transfers to ultimately transfer enough to buy property.

But people find ways around the rules, she says.

Most important of all,

Despite fears the recent 15-per-cent tax in Vancouver aimed at curbing foreign buyers would cool the market, Metro Vancouver saw $3.27-billion in foreign buyer sales in the past year … the market sizzles!

While real estate is happening in China (at least at corporate level),

Dalian Wanda Group’s $9.3 billion sale of nearly 90 tourist and hotel assets to Sunac China Holdings was just one indicator of the rapidly consolidating Chinese real estate market. Real estate companies in China are projected to spend more than $27.6 billion in acquisitions in 2017…. Basically, you buy me, I buy you =”Equity Bubble”, so to speak.

However,  some analysts do not quite share the same sentiment,

Domestic real estate investment in China is dropping. Numbers released from the National Bureau of Statistics of China show that May’s property investment in terms of square footage was higher than last year, but still remained way below the baseline.

And there is a lot of politics …

It would be hard to imagine a more obscene display of Canada’s slavish relationship with China’s depraved Communist Party regime: The very moment imprisoned democracy activist and Nobel Peace laureate Liu Xiaobo died under heavy guard on a hospital bed in the northeast city of Shenyang on Thursday, a beaming Governor General David Johnston was posing for photographs at the opulent Diaoyutai State Guesthouse in Beijing, shaking hands with Chinese tyrant Xi Jinping, Liu’s jailer, and tormentor. 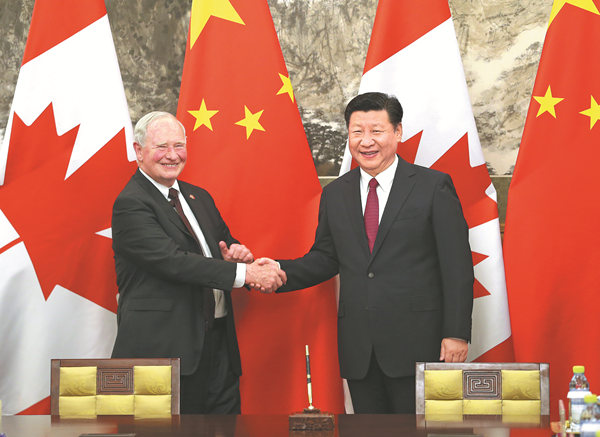 On June 8, Wu Xiaohui was whisked away from Anbang’s corporate offices by Beijing’s anti-corruption police. He immediately stepped down from his post as Anbang’s chairman and hasn’t been heard from since. But Anbang remains in good standing with the federal government, and of course with the Canada China Business Council.

Anbang is listed as one of the Canada China Business Council’s 13 “benefactor” corporations, a status that entitles the Chinese behemoth to “front-of-the-line member-benefits” along with such well-connected firms as the Power Corporation of Canada, Huawei Technologies and Bombardier.

Does this tell you something?

Anyway, here are the Seven Of The Weirdest Houses Ever Built … See the one in China, what does it tell you?

1.  Four shipping containers make up this three bedroom apartment in Sydney, Australia. They can be pulled apart for easy transportation.

2. These precarious looking houses were built were built on the rooftop of a factory building in Dongguan, China.

3. This house in Abuja, Nigeria is partially built in the shape of an airplane. The house was said to have been built by Said Jammal for his wife Liza because of her love for travelling.

4. Thierry atta sweeps the compound of his house built in the shape of a crocodile in Ivory Coast capital.

5. This house is built on a rock in river Drina, Baijina, Basta.

6. This house is built right into the rock in Coahuila, Northern Mexico.

7. This house was built upside down in Russia’s Siberian city of Krasnoyarsk. It was constructed as an attraction for local residents and tourists.