By Corruption Victim of City of Toronto

UPDATE: In relation to my previous articles,

“Why London Inferno will happen in Toronto” and  “Ontario: Fire Code refers to Building Code to determine building safety”,

Just like the tragic London Inferno, we believe the existing fire hazards are ‘disaster waiting to happen’. Appeals to get the City of Toronto to address the anticipated safety risks has so far fell on ‘deaf ears‘. It is for this reason, I commented “Why London Inferno will happen in Toronto“.

Before proceeding with Toronto Building Scandal, some controversial comments from couple of “readers” popped up at a social media. And to my astonishment, their argument basically suggests (in the event of a fire outbreak),

“Killing A Few Is No Parallel To Mass Murder”

“Posing Life Risks To A Small Group People Is Okay” 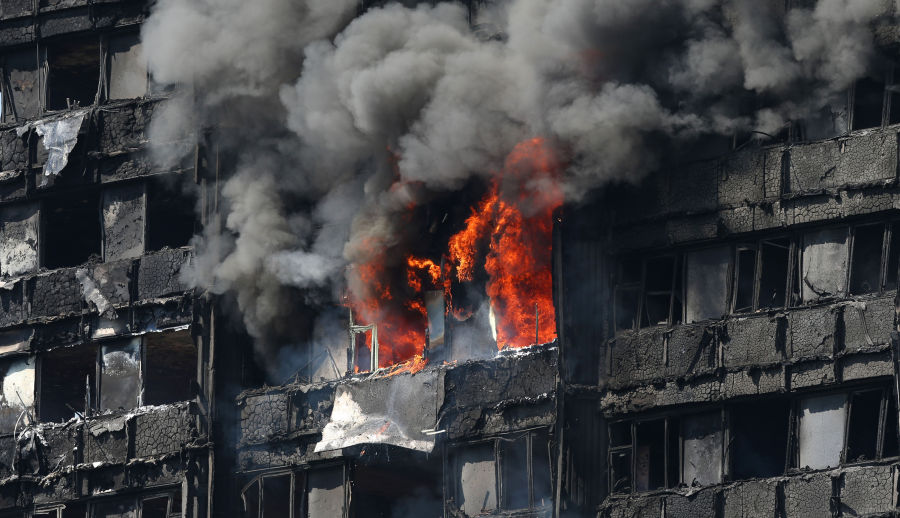 Of course, these are not the exact words of the comments. This is nevertheless the context of their argument.

The readers believe that the “Illegal Extension – Fire Hazards” in question is no big deal, no “parallel” to major apartment/condo development (in term of fire/life risks),

“The city is lax about a dinky 2-3 foot porch does not necessarily translate into them being lax about a major apartment/condo development. Although I wouldn’t be surprised if it were the case that some buildings aren’t up to code, I imagine they at least take a more stringent approach to them.
If someone wants to make the claim that our infrastructure is unsafe, I’ll need a bit more than the city taking it easy on a structure the size of a porta-potty.”

“Lol, I felt the same .. it all boiled down to the damn porch and the developed belief that this existence somehow means laws and codes are ignored willfully which will somehow tie into a high rise tower burning up. Couldn’t make it all the way through it though.”

My respond as follows: –

1. Why the illegal structure is hazardous to the general public?

If such fire risks are allowed on our neighbourhood, what makes you think the same wouldn’t happen to folks of a towering condo?

Have you tried burning a 3/4″ wood plank before? If you did, you should know thin dry wood board is highly flammable. It practically burns like cardboard.

2. On the scale of the illegal structure – “Dinky/Porta-Potty”

Let’s see if your “parallel” make any sense or not?

If you are talking in term of scale, I probably can agree burning down a few dozens of houses is no “parallel” to BBQ-ing hundred of poor souls in a condo tower. That’s if you are looking at the situation solely from the perspective of number of casualties only.

However, the crime is the same. Because killing one person is no less criminal than killing ten people. Murdering lesser number of people simply does not make the wrong or atrocity any less criminal.

This will lead us back to the fundamental question – The scale.

In your argument, you believe “the city may lax on (enforcing safety prevention of) a “dinky 2-3 foot porch”, but they won’t lax lax on major apartment/condo development”. That’s to say,

If the city can lax on smaller scaled fire hazards, what makes you think they won’t lax on major apartment/condo development?

Isn’t like saying if one steals an apple, one will never ever steal anything more valuable? Conventional wisdom tells us if one knowingly and wilfully committed a crime, and if nothing is done, one is likely to commit more and bolder crimes.

Crux of the matter is the City does not respect the very law that it wants everyone else to obey.

4. Why Compliance With Law Is Necessary?

Let’s take a quick look why there is law in the first place?

In a free society each and every man lives under a rule of law, as opposed to a whim-ridden rule of men.

Such a rule of law has only one purpose: to protect the rights of the smallest minority that has ever existed — the individual.

And the main purpose of building codes is to protect public health, safety and general welfare as they relate to the construction and occupancy of buildings and structures… Wikepedia

i) Fundamentally, law exists to protect the “minority/individual”,

Why so? Because these are the most vulnerable people, as compared to say an institution like the City of Toronto, which has hundred of lawyers at their disposal (and ironically, funded by the same vulnerable folk  ie. taxpayers).

Instead of correcting a wrong, is it tenable for the City to defend the wrong by deploying phenomenal public resources against individual folks?

If such a scenario is not an ABUSE to the highest degree, I wonder what is?

ii) Safety is the main purpose/focus of law.

In this case, trust you will agree the law (Fire Code/Building) is enacted to protect safety of all of us, the ordinary folk.

For the same reasoning, isn’t it akin to “whim-ridden rule of men” if compliance of safety law is enforced “selectively” and “biasedly”? If so, what is the point of having any law at all? And again, what makes you think the same catastrophe will never happen to highrises under such circumstances?

While I may accept there are circumstances where law compliance may be exempted. But only if it is for a good reason eg. for the good of society. Certainly not when there is no publicly tenable reason at all eg. for the benefits of a selected few “privileged” people.

As an analogy, tell me what do you think will happen to the society, say an officer gives you a ticket for speeding, but the officer himself is spared from getting a ticket when he is caught speeding (at even higher speed)? Unfortunately, this is the kind of “parallel” known and tolerated by the existing City adminsitration. And there is simply no recourse which folk may pursue as in the case of the fire hazards.

BTW, do you see accidents like “Glass falling from the sky” as a “dinky” issue as well?

Reader 1 followed up with a rebuttal:-

I’m commenting on what was in the article, which says nothing about falling glass. As far as I know the issue of falling glass was not the result of noncompliance, but a result of the building codes themselves, which were only recently updated in 2016 to address the issue–and they only apply to new constructions.

That said, I find the article unconvincing. Even if this patio would go up like a matchstick, I’m not seeing the parallel to what happened in London. If the author had some evidence that the houses are also poorly constructed and unsafe that would be something–since people actually live in them–and the fire would spread rapidly and dangerously through the actual areas where people live.

What happened in London was a horribly tragedy. This guy’s patio burning down in half a second is not even close.

I followed up with a respond as below: –

First of all, you do sound like you’re in the building business since you appear to know the “Faling Glass” issue very well. Ordinary folks like me didn’t even know half of what you have mentioned. For example, I didn’t know the revised building code is only applicable to new constructions. Whereby I do believe this particular policy is flawed.

I believe exempting ALL existing buildings from complying with the new safety code is wrong. Unless there is empirical evidence to suggest glasses of existing buildings are safe, the exemption may just potentially lead to similar accidents from recurring.

On a related note, I understand the responsible Chief Building official is an urban planner by training. While I can see zoning examination is part of Toronto Building jobs, which obviously requires zoning knowledge. However, I imagine it may make better sense to have an all rounded hands-on technologist with solid engineering background to head the building division. By doing so, perhaps incidents like the “Falling Glass” could have been spotted and prevented before it even have a chance to occur?

After all, we already have a celebrity urban planner as our Chief Planner. And the fact that practically all new housing these days are highrises, which obviously requires a lot more engineering than ever – Big stuffs need serious engineering. And as such, I imagine a hands-on engineer is probably more suited for the building business rather than a planner. What say you?

Similarly, if law compliance is lax or not enforced on certain “privileged” properties, what make you think the same won’t happen to the highrises? Isn’t such prejudiced practice akin to “whim-ridden rule of men”?  If so, what is the point of having any law at all?

The evidence is enshrined right in the Building Code itself, which dictates in layman’s terms: –

“Any opening (window/door) less than 1.2m (4ft) from the border/fence must have fire protection eg. Fire Curtain, and be constructed with non-combustible materials that have certain fire rating (that can withstand fire for certain amount of time) eg. Masonry Bricks.”

This particular building code requirement is enacted for a good (scientific) reason – Otherwise there will be unacceptable fire risks to the neighbouring buildings.

Any doubt, please consult the Ministry of Municipal Affairs – the building code is their baby. The City’s duty is to execute & ensure compliance – which they have failed to do so in this case.

Actually, you may also find the answer here: –

Why do you think they City is in complete silence and couldn’t refute the “allegations” at all? Mind you, the City employs hundreds, if not thousands of “experts” including lawyers. Perhaps you can help to shed some light here.

For a real parallel I would have to see some real evidence that high-rise constructions are being built without properly following fire safety codes.

Unless I am the boss of RCMP, how on earth can I possibly provide you with a list of buildings with safety deficiency? If you had any real experience dealing with City bureaucracy, you should know such information is not publicly accessible.

In fact, the standard response of Toronto Building to public inquiry is “You may always get the information under Freedom of Information (MFIPPA – Municipal Freedom of Information and Protection of Privacy Act administered by Corporate Information Management Services)”. However, my experience revealed the freedom is only as far as what the City division is willing to release. Else, you get nothing beside excuses. Or if they ever decided to response to you, they will end up by stating “we will not answer question we have responded before (even you can prove what they have mentioned is false). Otherwise, they may straight away tell you they will not provide you with an update at all eg. Fire and Auditor General. And if you ask how on earth will you know the issue has been dealt with? Especially for dire matters concerning public safety? Expect neither reason nor answer. Futher details will be reveal in the Toronto Building Scandal series.

Such is the reality with our existing Administration of the City of Toronto.

Please feel free to ask anything. Criticism is welcome.

The “Readers” are likely no ordinary folk, but “insiders”. Because they appear to know the building issues very well, and they have since dissappeared as soon as sensitive issues were brought up. (Perhaps they do not want more scandalous exposé to be posted on the social media?).

At the same time, hacking attempts at this site has been on the rise (and coming from very suspicious sources).

Our message to the hackers: We’re ready and will be able revive the site in no time even your hacking attempt is successful. Have fun hacking our industrial strenght security system.