By Corruption Victim of City of Toronto

It was comforting to hear the assuring statement by Toronto Fire Chief Matthew Pegg: –

“Here in Ontario we are fortunate to have the comprehensive fire protection and fire safety measures that are contained in the building code,”
He further explains residential building in the province must be constructed with non-combustible construction (in accordance with the Ontario Building Code) ie. be built out of materials that don’t burn.

Of particular interest here is the fact that the Fire Chief himself confirmed Fire Code refers to Building Code to determine building safety. In another word, building that contravened the building Code in fire safety also violated the Fire Code (under the Fire Protection and Prevention Act, 1997). 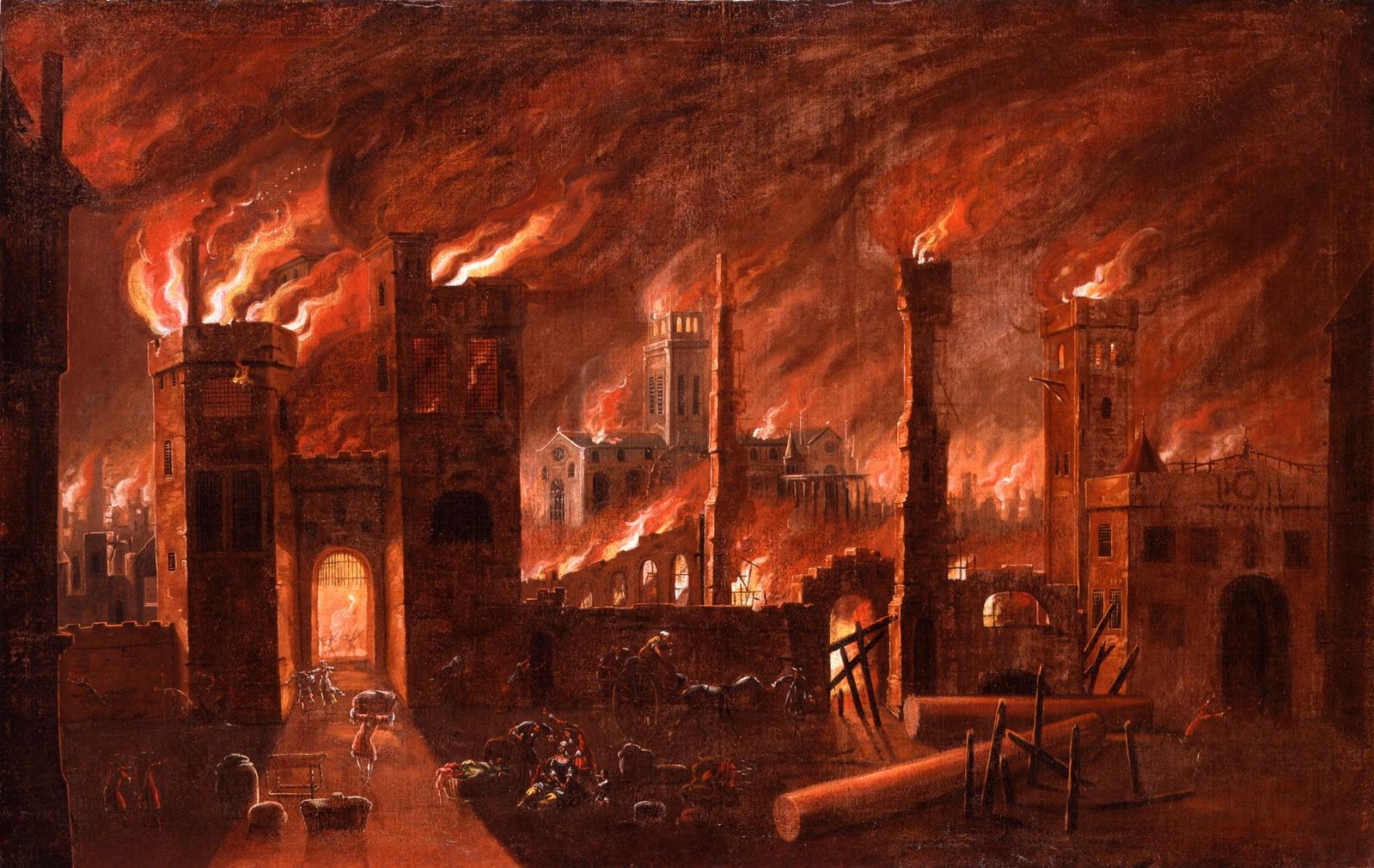 This is what happened: –

The fire hazards as reported in the previous posting (“Why London inferno will happen in Toronto”), which is posing safety risks to the public was reported to Capt. O’Connell of the Toronto Fire Prevention North Command. 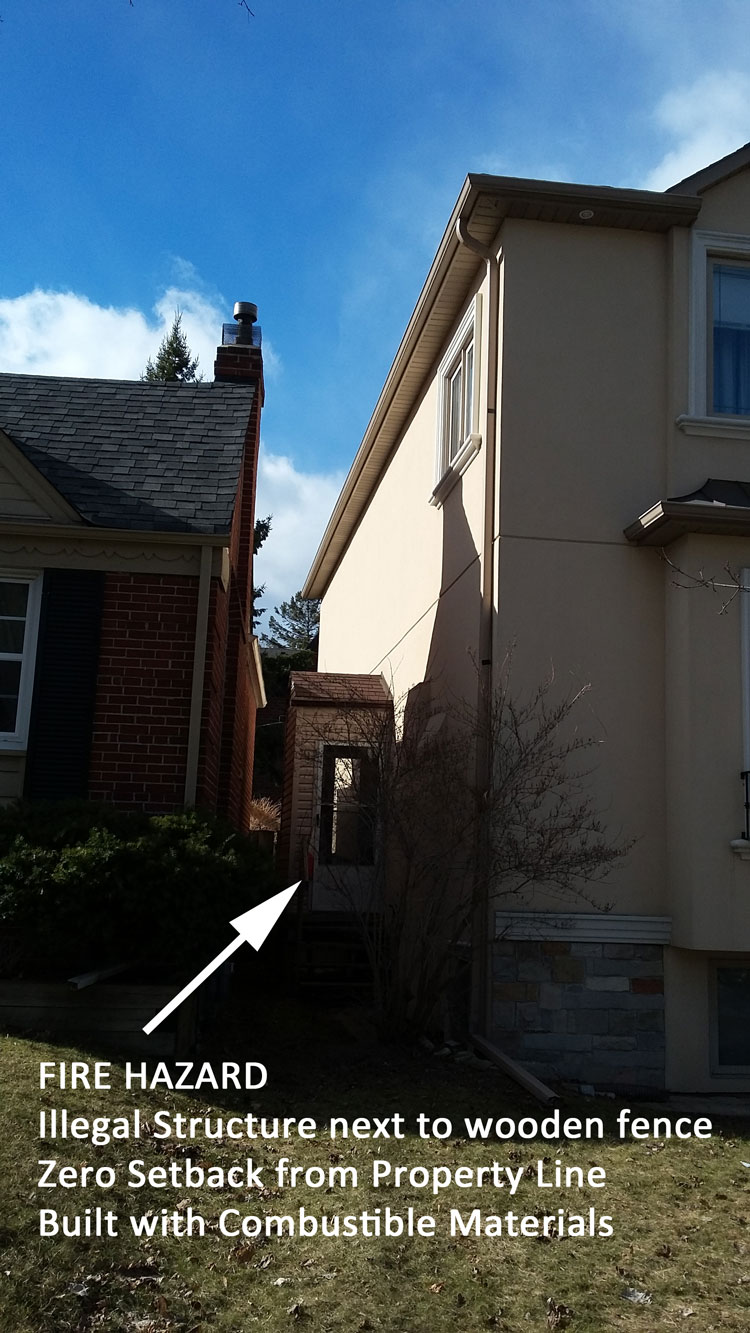 The first thing he did was to inform us that “He won’t be giving any update on the safety hazards for privacy reason.”

After he was told there is No Privacy issue here, because Fire Hazards affecting safety of the public is not a private matter. The public has every right to know safety risks are being dealt with as stipulated by the law. For example,

Criminal Code of Canada (R.S.C., 1985, c. C-46)
CRIMINAL NEGLIGENCE
219 (1) Every one is criminally negligent who
(a) in doing anything, or
(b) in omitting to do anything that it is his duty to do,
shows wanton or reckless disregard for the lives or safety of other persons.
ii) WILFUL AND FORBIDDEN ACTS IN RESPECT OF CERTAIN PROPERTY
429 (1) Every one who causes the occurrence of an event by doing an act or by omitting to do an act that it is his duty to do, knowing that the act or omission will probably cause the occurrence of the event and being reckless whether the event occurs or not, shall be deemed, for the purposes of this Part, wilfully to have caused the occurrence of the event.

At first, Capt. O’Connell responded by saying the same thing: “I won’t be giving update due to privacy issues.”

Two days later, he responded by saying: “We’ve cleared the file.” (I supposed the reason why he changed course and responded is because he finally realized the responsibility he has over public safety hazards as stipulated by the law).

I followed up by asking him politely “What do you mean by “We’ve cleared the file”? Does that mean the fire hazards have been eliminated, and the public can sleep in peace now?”

The final answer came two days later: “The building met all the requirements of the Ontario Fire Code on our last inspection”.
Little did he realize we actually know what the Toronto Fire Chief Matthew Pegg confirmed above, that Fire Code refers to Building Code to determine building safety. In another word, building that contravened the Buildng Code (in fire safety) also violated the Fire Code.

And what does Building Code says about the fire hazards?

“Any opening (window/door) less than 1.2m (4ft) from the border/fence must have fire protection eg. Fire Curtain, and be constructed with non-combustible materials that have certain fire rating (that can withstand fire for certain amount of time) eg. Masonry Bricks.”

This incident proves the responsible Toronto Fire Prevention staff either didn’t know Fire Code refers to Building Code to determine building safety, or perhaps he does. And he chose to mislead the public for reason unbeknownst to us.

The matter has since been referred to his superior.

It will be unfair to question competence of Toronto Fire staffs based on this incident alone. But is this the only incident we have had negative experience with Toronto Fire? No, we have had two so far.
To be fair, I like to think most staffs of Toronto Fire are generally courteous and competent. They better be since our life depend on them in the event of any fire outbreak. And as mentioned, I find solace in the Toronto Fire Chief Matthew Pegg who at least has demonstrated he knows what he is talking about. Trust he is both a capable professional and a caring gentlemen in real life.
Anyway, here comes the next one – quite possibly the most nauseating experience we have ever encountered all our life.
There is a firefigther named [Censored – Jail Threat] D. Venderbij (he doesn’t like how his last name is pronounced (ended with “-bij”), so he calls himself “Censored” “D. Venderby”). He goes who goes around telling everyone he is a 25 years veteran of Toronto Fire, a fire safety expert, and please address him as “Captain” (we found out later he is actually an acting captain of a fire truck).
Apparently he is a full time employee of Toronto Fire, the bizarre thing is you will find him at home all the times nearly everyday. And he doesn’t seem to have anything better to do other than revving his noisy car and poking his nose into neighbour’s affairs.
What has this particular firefigther got to do with the subject matter, you may ask? Well,
Is it true that he could help to accomplish such amazing task like building an unsafe and unlawful building? Well, we don’t know how else one can explain why unsafe and unlawful structure/buildings are allowed to be erected without any valid building permit as briefly mentioned in “Why London inferno will happen in Toronto”, if his claim is not true.
What is even more mind-boggling is this firefigther even dared to disrespect the Police, boldly and openly.
How so?
One of his neighbours was incessantly harassed by him for years (let’s just save that kind of things he has done, lest you throw out for no good reason). Out of desperation, the neighbour enlisted the help of the Police, who warned and ordered the firefigther to cease harassing his neighbour. Not once, but repeatedly for three times.
The matter was also reported to his boss. Still, he did it again few months later for the fourth time. We can only imagine this firefigther must be sick. Let’s hope his sickness is not due to occupational hazards. We obviously needed mentally sharp firefigthers who is able to make the right decision during critical moment like a fire outbreak. Life is after all, precious.
Anyway, guess the Police must have come down very hard on him for the fourth time, because we haven’t heard of any new harassment since then. Lets’ hope the firefighter has since recovered from his sickness. He is now mentally more stable and capable of carrying his duty as a firefigther. Most important of all, no harass no one no more.
To sum up, we have two Toronto Fire staffs, one captain, and one “acting captain” who provided false information to the public on fire safety, either they didn’t know Fire Code refers to Building Code to determine building safety, or perhaps they do. And they chose to mislead the public for reason unbeknownst to us.
As a matter of fact, writing of this article was never intended. It just so happens that the London Inferno tragedy took place and the Toronto Fire Chief commented such catastrophe is unlikely to happen in Toronto, whereby he mentioned Fire Code refers to Building Code to determine building safety. Which we feel this is a piece of important information we should share with the public.
Next – The Toronto Building Scandal Series (and how will it affect folks of Toronto).
Related: –

« Toronto’s Buildings are a disaster waiting to happen?