Condo developers start 2014 with record number of launches … And more are planned, with new project launches scheduled unusually late, into May, as builders see a surge of pent-up demand after the downturn of the last two years, especially for condos close to the Toronto core.

Developers are so optimistic that confidence has returned to the condo market, they’ve launched sales of a record number of new units — more than 2,700 — in January and February alone.

Those 2,721 new units are in eight projects, according to figures from research firm RealNet Canada, which will release March launch numbers later this month. That exceeds the 2,394 units in nine projects launched in January and February of 2011, the record year for condo sales.

The total is also up significantly from the 1,261 unit sales launched in the first two months of 2012, and the 1,873 units that went to market in the same period of 2013. That’s when fears of a condo crash led to a dramatic slump in sales and flagging investor interest.

Shortage of house listings in Toronto could be boon for condo sales: Scotiabank

The shortage of single-family homes for sale across Toronto is likely to buoy the resale condo market this year as first-time buyers, says a new report from Scotiabank. 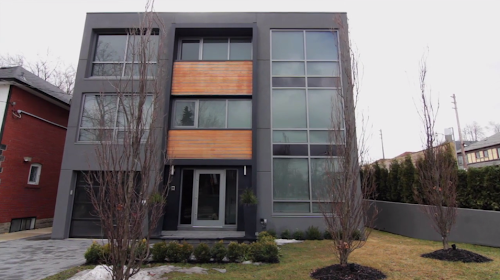 It looked familiar and that is because it was another one of those Grey Houses.

Of the Grey Houses, this one is the worst.  Plus, it really, REALLY needs trees.

Too bad they cut all of these suckers down though…

I didn’t think there was any way they were going to get close.

It’s back on the market.

And I am pretty sure this is a staging furniture again.  But is a massive print of Pierre Trudeau considered staging art?

The new asking price is…

At least they have added some tree

« New Mortgage Rules & Sofia Vergara’s Panty-Dropping Palace
How Much Real Estate You Can Get For $1 Million In Canada ? »