Economists are coming out with warnings that Canada’s real estate juggernaut is about to come to an end (Scotiabank’s Adrienne Warren is just the latest) and others keep fretting about Canada’s record-high household debt levels, but Toronto residents don’t seem to be listening.

Home sales in the country’s largest metro area roared back to life in the first quarter of 2014, according to data from Realnet Canada, with total sales jumping 60 per cent from the same period a year earlier. Condo sales were up 68 per cent and low-rise homes up 51 per cent.

And numbers from the Toronto Real Estate Board show the city’s housing market has passed a major milestone: It now costs more than $1 million to buy an average single-family home — $1,012,172 to be exact.

Prices for standalone homes soared by a stunning 19.2 per cent in the past year. By comparison, condo prices were flat, up 0.2 per cent, to an average of $386,874. These two markets appear to be diverging completely, with warnings of overbuilding in the condo market and warnings of a shortage of standalone homes. Even though sales and prices of single family homes are way up, total sales are actually below the 10-year average — there simply aren’t enough single family homes for everyone who wants one.

A sharp steepening in price growth, like in Toronto’s standalone house prices, should raise concerns about a housing bubble. As this chart from BMO economist Doug Porter shows, bubbles tend to be marked by an unreasonable acceleration in price growth. Here, Toronto house prices can be seen rising very sharply before the housing bubble burst of the early 1990s: But in the case of Toronto’s standalone housing market, the recent price spike may just be the result of the increasingly severe shortage of new single-family homes.

Land use policies favouring high density development, growing suburban commute times and other factors are prompting developers to build townhomes and condos rather than single-family homes, and the number of standalone houses being built around the GTA is on a long-term downward trend.

And that affordability depends on mortgage rates remaining at rock-bottom levels. As numerous economists recently predicted, with the U.S. economy on the rebound and Canadian fixed-rate mortgage rates dependent on U.S. bond yields, Canadian mortgage rates are likely headed up soon.

And when that happens, we likely won’t be seeing any more 19-per-cent price hikes. And as BMO noted in a recent report, with Canada more dependent on real estate jobs than any other G7 country, a housing slowdown could be bad news for the economy.

So make sure you can actually afford that mortgage when buying into Toronto’s million-dollar home market. 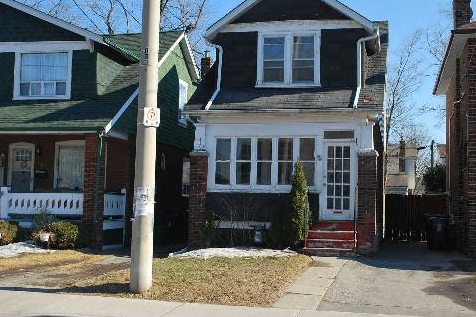 This is a 3 bedroom, 1 bathroom house on a 21.23 x 115 foot lot just north of Danforth in Danforth Village.Toronto Community Housing Project house.

This house is pretty disgusting.

It’s located down the street from the 3 bedroom, 1 bathroom detached move in ready house on a 23.12 x 103 foot lot at 611 Sammon Avenue that was closer to the hospital incinerator (as in right across the street).