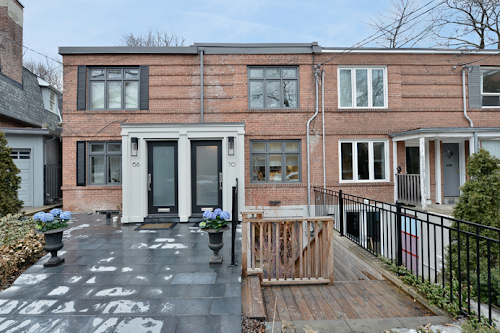 Earlier this month, this 2 bedroom, 2 bathoom house at 70 Summerhill Gardens was put on the market.It was a 1,700 square foot (including the basement) row house located on a 14 x 105 foot ravine lot with no parking.

And it was done.

I don’t love all the design choices like the stone wall and the dark stairs, but the living room has great built-ins and fireplace.  And though I would have preferred a lighter kitchen, I still like it.

It sold (if memory serves me right)…

A 2 bedroom row house with no parking right near the train tracks.

P.S.  I don’t really get that basement walk out to the street.

In the market for… a house with two-car parking?

Parking doesn’t come cheap in this town, which is a problem for those who need a set of wheels to get around. These four houses each boast at least two spots.

The draw: Sitting on a 40-foot-wide lot, this detached house has two spacious bedrooms. There’s also a finished basement and a sizeable backyard, and it’s close to abundant lakeside parkland just south of the Gardiner.

The catch: Good thing there’s a garage to hold your two cars, because TTC access in this neighbourhood is atrocious. The kitchen is rather plain and dated, and closet space is scarce.

The draw: Less than a kilometre from the lake, this bungalow has two bedrooms on the main floor and another in the finished basement. There are laminate floors throughout, and sufficient driveway space to park three cars.

The catch: The galley kitchen is narrow, with new appliances but old floor tiles. And while there’s a kitchen in the basement, renting the space out would mean sharing the laundry room with a tenant.

The draw: This detached brick house is divided into three apartments with separate entrances, making it a potential income-earner. It’s close to Earlscourt Park and plenty of new restaurants on St. Clair West.

The catch: The division is all that’s been done, so a top-to-bottom renovation is needed to make the space livable. One of the three parking spots is in the front yard, which is bad for drainage. (The city no longer allows paved front yards, but existing pads are grandfathered in.)

The draw: This teeny-tiny semi manages to fit three bedrooms and two and a half bathrooms inside its walls. The partially finished basement has a separate entrance and roughed-in kitchen, if you feel like adding an income unit.

The catch: There’s a private driveway with room for three cars at the side, but no real backyard to speak of—the lot is only 43 feet deep. One of the bedrooms not even 80 square feet.

« Canada: Palace for Prince or a pauper
Toronto is the most happening real estate market in the universe »