China’s home prices rose the most in nearly three years in September, adding to fears that a property bubble is emerging heading into a Communist Party leaders’ meeting next month.

Average new home prices in 70 major Chinese cites climbed 9.1 per cent last month from a year ago, led by a surge in big cities including Beijing and Shanghai, according to Reuters calculations. 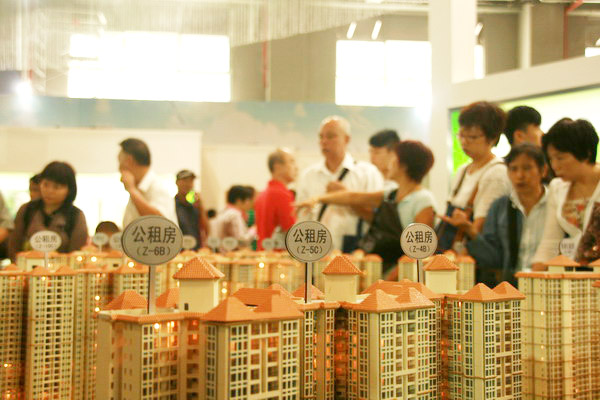 Led by major urban centres, average new home prices rose in 69 of 70 cities from a year ago, according to the National Bureau of Statistics.

Guangzhou prices recorded year-on-year growth of 20 per cent, followed by 19.7 per cent in Shenzhen, 17 per cent in Shanghai and 16 per cent in Beijing. Average new home prices edged up 9.1 per cent, according to Reuters calculations. That was the biggest increase since the statistics bureau changed the way it calculated home prices in January 2011.

Chiang said Shenzhen could be the next city to roll out property taxes.

“There were increases in both the transaction volume and home prices compared with the second quarter, while the land market was especially active in the first-tier cities,” said chairman Hao Jianmin.

The company said it had locked in 93 per cent of its annual sale target of HK$120 billion in the first nine months of the year.

The central bank may tighten policy moderately as inflation creeps up, relying on money-market liquidity adjustments rather than blunt tools such as interest rate rises, according to Reuters, which quoted a policy adviser to the central bank.

Expectations are growing that the People’s Bank of China will put a brake on the fast credit expansion of recent months, a view fuelled by its move to hold back from liquidity operations for the second day running.

“Policy will only be tightened slightly, as inflation is rising. There are some concerns on bank lending,” said Song Guoqing, a member of the bank’s monetary policy committee.

Chiang said banks had increased their mortgage rates to 10 per cent above the regulatory benchmark lending rate in the past two months due to tighter cash conditions.

“The credit market is very tight,’ he said

Mark Budden of consultancy EC Harris said price growth would be sustained, given high demand from homebuyers and the government’s reliance on property as a pillar of growth.

“It seems likely that the Chinese government will not introduce new market control measures until the reform meeting in November,” Budden said.

Wenzhou was the only city that recorded a decline in housing prices, with a 2 per cent fall last month from a year ago.

Sandy Li [email protected]
This article appeared in the South China Morning Post print edition as Mainland home prices rise strongly.
Why China, come to the real estate wonderland … Canada. See what we got in store for you?

Cabin on the shore of Shuswap lake, British Columbia, Canada 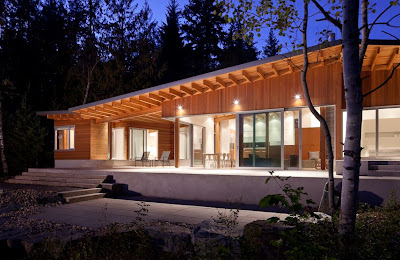 Mature Cedar, Poplar and Fir trees litter the site on the west, north and east sides. The southern portion of the site rolls towards the beach, dominated by 180-degree views of Shuswap lake and the low-lying hills that bound the lake’s opposite shoreline.

Designed as a seasonal retreat for a couple, this 2300 square foot single-level house was conceived to support weekends of casual outdoor/indoor living for the owners and their guests. One of the main design objectives was to seek ways of marrying a traditional cabin vernacular with a open-concept space, modern, contemporary, tailored to its site and facilitating an ease of movement between exterior and interior spaces. This was achieved with the support of an extensive use of wood.

Upon entry into the space a clear structural order in wood becomes apparent. The interior spaces of the cabin are organized around a central circulation hall lined by a row of exposed 7”x 7-1/2” Douglas Fir glulam posts, and punctuated with light cast from skylights at either end. A 7”x12” glulam beam supporting 3”x9” exposed glulam joists, leads one from the main entry to the living area of the home as it gently rises to create a tall, light filled volume. In the opposite direction, the wood ceiling slopes down creating the compressed, intimate spaces of the guest bedrooms and library. A large outdoor room carved out of the plan separates the ‘guest wing’ from the rest of the cabin and serves as a shaded refuge from the intense summer sun. Glazed on its north, west and east sides and open on the south, the outdoor room allows for lake views from deep within the interior and blurs the boundary between outside and inside. Detailed to allow their bottom track to be flush with both exterior and interior floors when open, large sliding doors on the eastern side of the outdoor room expand the interior space outwards further eroding any clear demarcation of interior versus exterior spaces.

Together with a supporting cast of natural materials, wood ultimately works to shape, define and unite the spaces of the home seamlessly from inside to out. Western Red Cedar clad exterior walls continue through to the interior, becoming tactile elements in the enclosed space and important details in consideration of the overall interior palette. Vertical grain Douglas fir built-in millwork throughout the home references the living firs on the native lakeside site and imbues the clean, simple spaces with warmth and texture. Juxtaposed to these varying soft wood tones is a monolithic polished concrete floor and robust slate fireplace that anchors the home and draws one’s gaze upwards to the exposed Douglas Fir glulam roof structure and ceiling decking. These structural elements extend out to the exterior and define the continuous roof line that quietly commands the north and south elevations. Subtle sloping undulations in the roof structure delineate the three main segments of the house: the living area, the guest-wing and the owners’ bedroom with en suite bathroom. 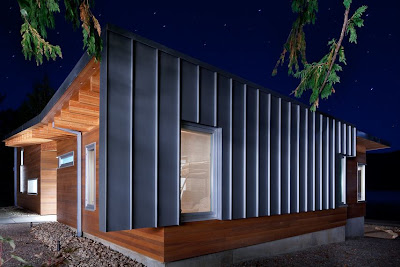 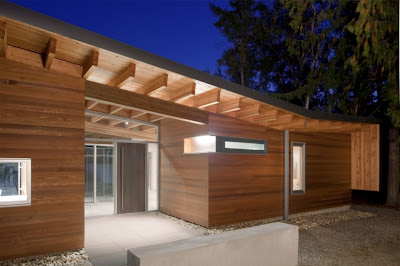 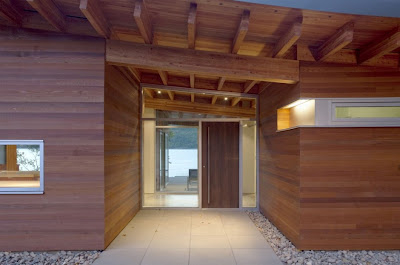 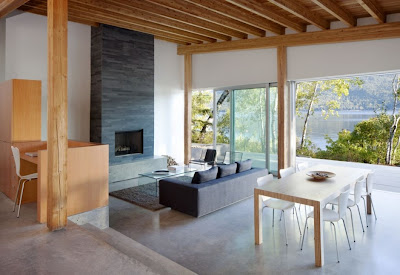 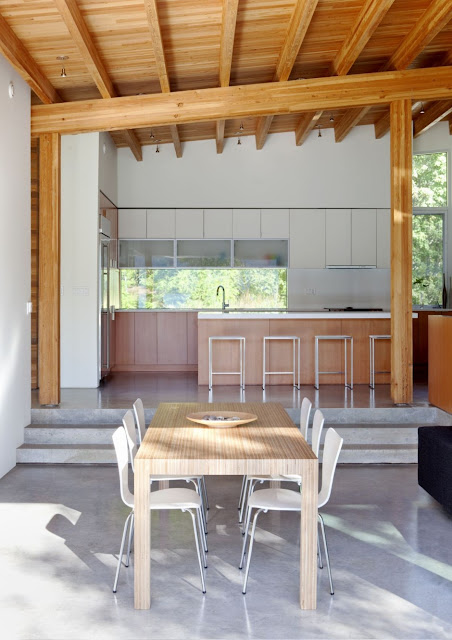 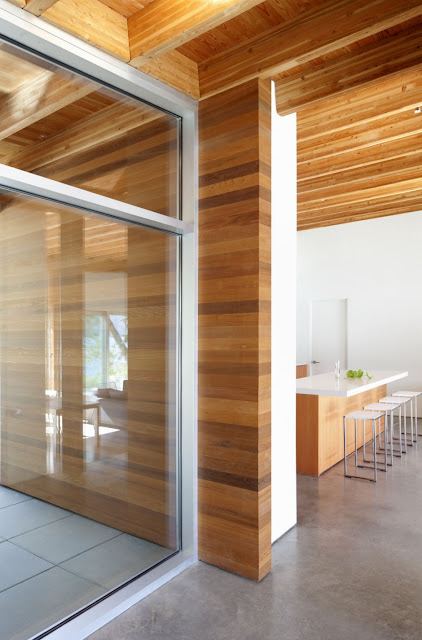 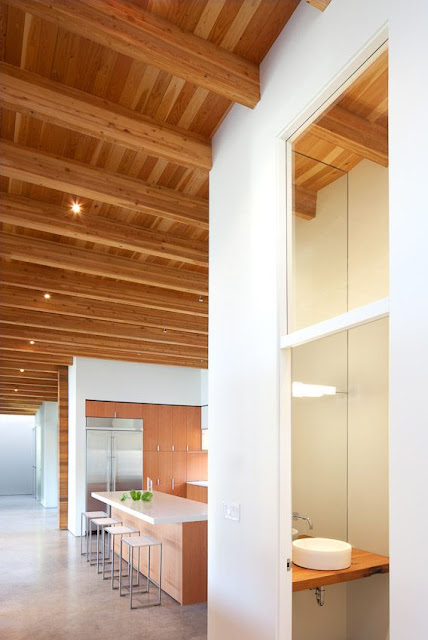 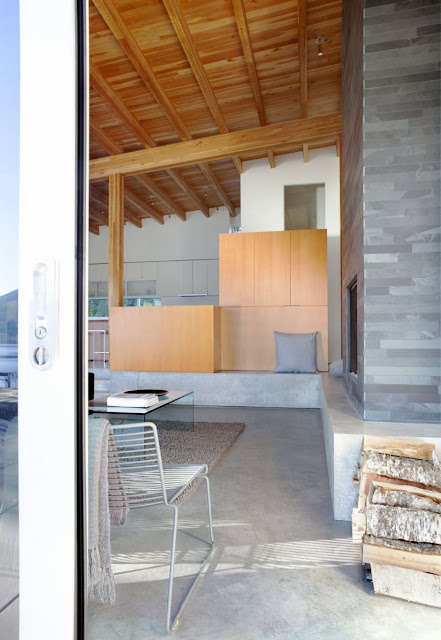 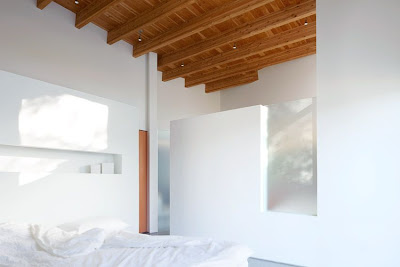 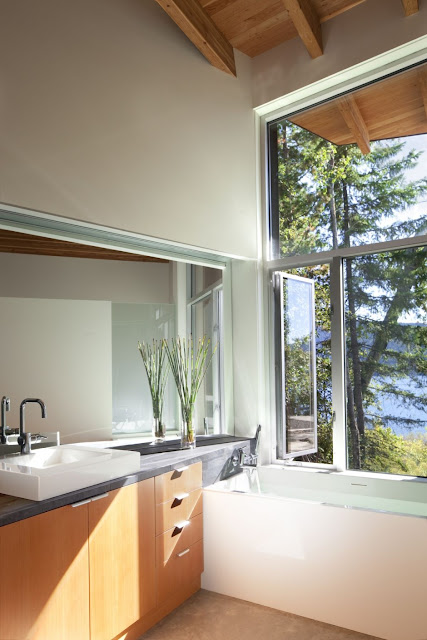 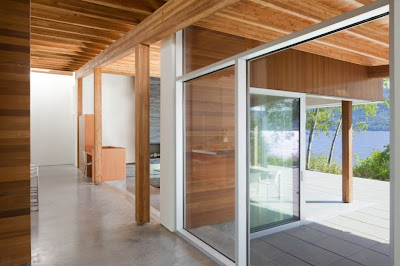 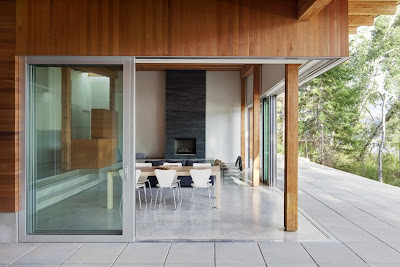 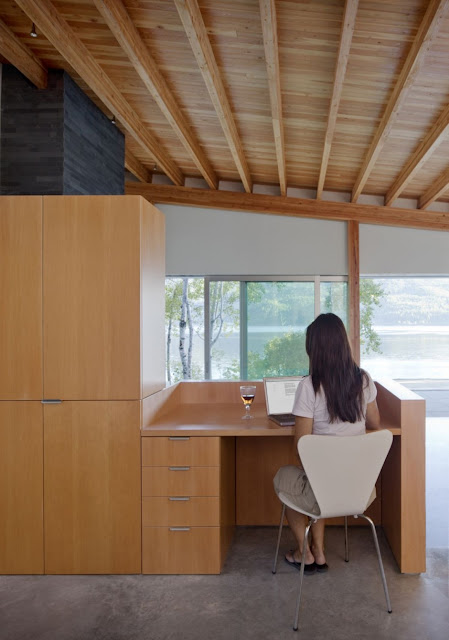 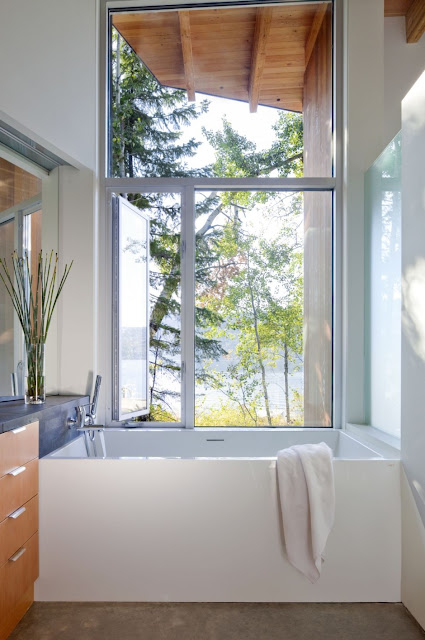 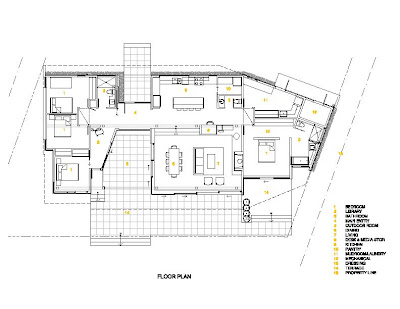 « Toronto new home sales regains glory, but not quite like what happened in 2012
Canada Realty Reality Wed Oct 23 »