Apparently as many as 2/3 Canadians have converted to a new religion known as “Bubbleology”.

To the faithful Bubbleologists, Housing Bubble is the mighty Devil and his coming is imminent. Because certain unscrupulous profiteers have provoked the wrath of the Lord. However, Housing Bubble is no Armageddon, it’s not the end of the world yet. It’s just that there will be great suffering among ordinary folks whenever Mr. Bubble Housing comes visiting.

They believe the time is nigh, they believe the Great Suffering will take place in 2018, that’s when proponets of the “Great White Short” will be laughing their way to the banks… Open living area designed in a circular fashion and semi-enclosed by rotating glass panels in this home located in Hollywood Hills.

Nearly half of Canadians are worried about what interest rate hikes will do to their mortgage payments.

A majority of Canadians say there’s a housing bubble, but only a minority believes it will burst in the next year, a new survey has found.

The survey from Ipsos, carried out for consumer insolvency firm MNP Ltd., found 67 per cent of Canadians agree that the country is experiencing a housing bubble, but only 43 per cent think it’s going to come to an end in the next year.

With Canadian debt loads near record highs, even relatively small shifts in interest rates could have a noticeable impact on households.

According to expert estimates, any hike in interest rate is likely to cause typical homeowners anything from $1,000 to $3,000 more in mortgage cost. That’s scary considering most ordinary folks already completely submerged in water, that they are basically surviving on borrowed time.

The Bank of Canada has joined the Fed in embarking on the road to monetary policy normalization, hiking the benchmark monetary policy rate +25bps to 0.75%. This comes at a time as Canada’s property market is being increasingly labelled a bubble. Indeed the second chart, below, shows a stark acceleration in property price gains and an increasingly overvalued property market (looking at the OECD housing market valuation indicators). Thus it makes sense that the central bank would reduce monetary policy stimulus in this backdrop.

The risk in this sort of situation is always going to be that the central bank could end up bursting the bubble, and at some point it probably will, but so far this is just a small rate hike and only the beginning of the policy normalization process. As the Bank of Canada further normalizes policy the risk of a bursting of the Canadian housing bubble will rise. Given the importance of Chinese demand, it will also be important to keep tabs on economic conditions in China. At this point the risk assessment for Canada is slightly higher and the outlook is that risks will rise… Investment.com

Which REITs Are the Safest Bets if Canada’s Real Estate Bubble Bursts?

This reversal in home prices comes after the provincial government imposed a 15% tax on foreign buyers in April to curb speculation as part of its affordable housing plan.

This changing dynamic of the Canadian real estate market raises this important question: Which real estate investment trust (REIT) can withstand a possible crash in property values if this sluggishness prolongs and develops into a long overdue correction?

The chances of such a scenario developing aren’t very strong though. Most forecasters are predicting a soft landing rather than a crash in real estate values as demand dynamics remain strong, especially in the Greater Toronto Area and Vancouver.

But investors who earn a regular income from REITs have a reason to worry amid disturbing headlines in the financial press almost every day. After all, they saw the prices of some REITs drop by more than 50% during the 2008 Financial Crisis.

Another threat to the REIT sector comes from a possible interest rate increase by the Bank of Canada starting in July—a move which will increase the borrowing cost for REITs, leaving less for the profit distribution.

In this environment of uncertainty, I’ve picked the safest Canadian REITs which have solid business models and are in much better positions to withstand any economic shock or a sudden rise in interest rates.

RioCan Real Estate Investment Trust (TSX:REI.UN) is Canada’s largest REIT and is anchored well to maintain its distribution. With 300 retail properties across Canada, it owns and manages the country’s largest portfolio of shopping centres, including Wal-Mart, Canadian Tire, and Cineplex.

With the committed occupancy rate of 95%, RioCan tenants include very strong names that perform well in a recession due to their vast economic moats—a term used by Warren Buffett to describe companies commanding a strong competitive advantage over their rivals.

The most important performance criterium investors use to judge the performance of any REIT is its ability to maintain the cash flows to pay its unitholders. This ratio is called adjusted cash from operations, or AFFO.

In the case of RioCan, the trust is generating more cash than its distribution to unit holders. In first quarter of 2017, RioCan generated $0.44 per unit in AFFO and paid $0.35 per unit in distributions.

RioCan pays a monthly distribution of $0.1175 per unit. At the time of writing, the payout provides an annualized yield of 5.8%.

RioCan has also cut its debt by using proceeds from the sale of its U.S. assets last year, generating a cushion to shield itself from possible rate hikes. In the first three months of 2017, RioCan’s total-debt-to-total-assets ratio was 40.8%, down from 45.6% in the same period a year ago.

Chartwell Retirement Residences (TSX:CSH.UN) is a Canadian REIT which also fits well in a conservative investment strategy to protect your capital during an economic downturn and continue to earn stable monthly income.

Chartwell Retirement is the largest operator in the Canadian senior living space, managing over 175 locations across four provinces in Canada. As the Canadian population ages, investing in retirement residences and long-term care facilities is probably one of the best strategies in the real estate sector.

And this is the reason that Chartwell Retirement has done much better when compared to the performance of S&P/TSX Composite Index. Over the past five years, its share value appreciated by 60%, almost double the returns of S&P/TSX index during the same period.

This REIT pays a stable monthly distribution of about $0.048 per unit, up 7% over the past five years. At the time of writing, the payout provides an annualized yield of 3.78%.

Should we believe the Motley Fool?

We don’t know. All I know is 2/3 of Canadians have embraced Bubbleology. In another word, they will most likely avoid any real estate related stock like plague?

What do realtors say?

Here’s what they told BNN,

Needing a return to normal

“Since the onset of the Great Recession nearly a decade ago, Canada’s economy has been running on emergency power, provided mainly by low interest rates. The Bank of Canada’s indication of an imminent rate hike is a positive signal that the Canadian economy is in a place of stability and ready to withstand a slight interest rate increase.

We believe that the real estate market is best served by a healthy economy that requires a return to normal conditions.”

“Bank of Canada raising interest rates by 25 basis points would have a dampening effect on the demand for homes – but I’m not convinced we’re going to see any immediate effects.

The psychological effects of this rate increase might counterintuitively have a positive effect on the real estate market. If buyers believe interest rates will increase even further in the near future, some of those sitting on the sidelines watching the cooling market with uncertainty may get back into the hunt.” 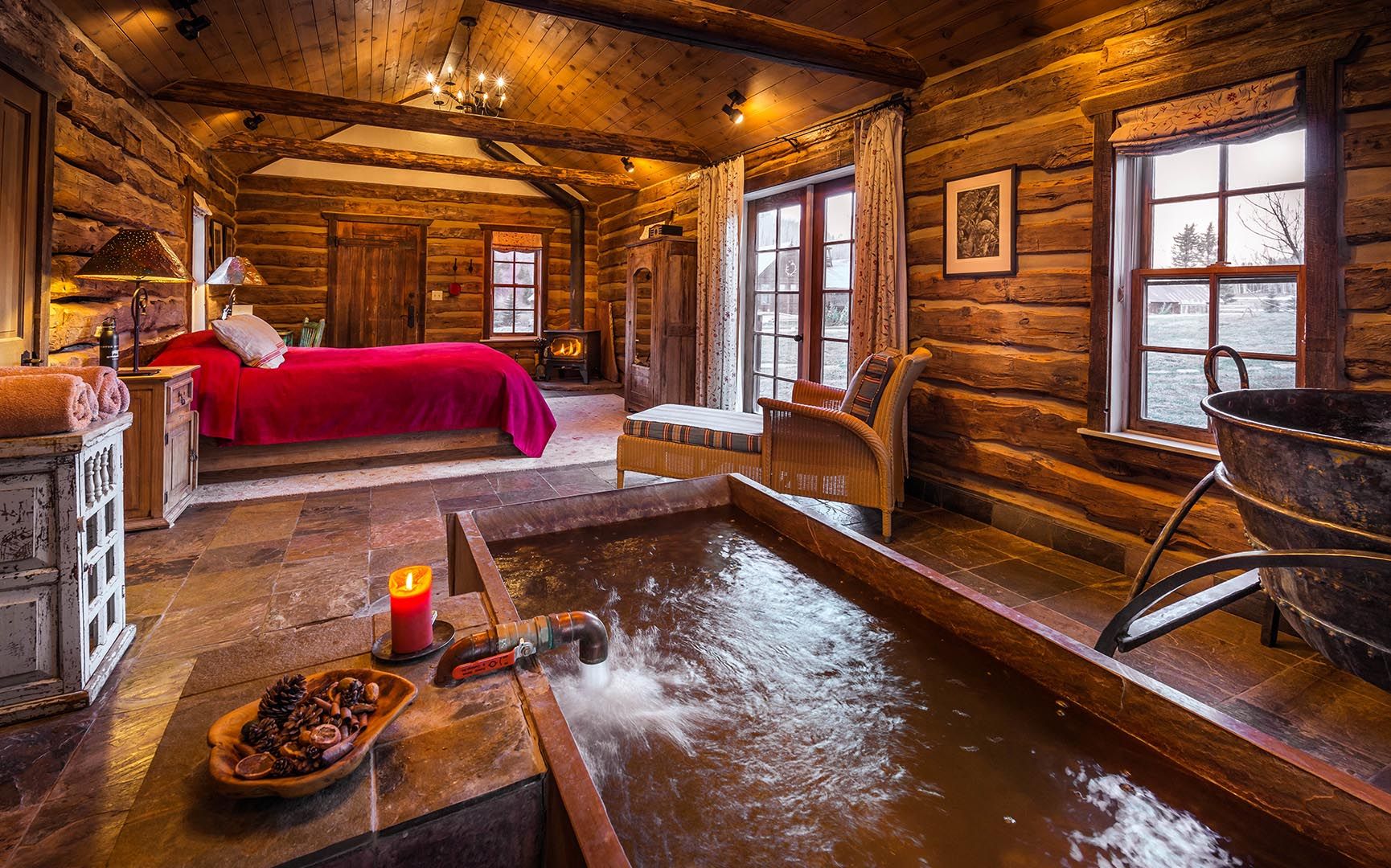 Tub Filled by a Hot Springs in Colorado Resort Built in an Old Mining Ghost Town.

That’s no surprise. What surprised many people is  the Loonie flew!

What sent the loonie soaring when everybody expected the rate hike?

Some were caught off guard by the significant spike in the loonie that followed, pushing it close to the 79-cent mark.

While the Canadian dollar’s recent strength (up more than five per cent in the past month) has been attributed to expectations for higher interest rates, it was thought that much of the rally had already run its course.

“The market seemed to interpret that as implying that the bank is planning on more than one further hike this year,”

Anyway, they say there will be a lot more money pouring in from the Middle Kingdom …

Chinese Investors To Spend $1 Trillion On Real Estate In Next Decade: Report

Toronto and Montreal have surpassed Vancouver as the biggest targets for Chinese buyers in Canada.

The company predicts that Chinese investors will pour some $1 trillion (C$1.27 trillion) into real estate around the world over the next decade, of which a considerable amount is likely to land in Canada. The country is the fourth-largest destination for Chinese real estate investment, behind the U.S., Australia and Hong Kong.

Sounds like the world is after after all, still a beautiful place.

Guess that’s the message Liberals wanted you to hear … Stay Positive, Be Optimistic.