Fresh from the oven: –

Canadian housing starts were stronger than expected in June and May figures were revised higher, according to data released on Tuesday, the latest report to show the property market rebounding from last year’s government-induced slowdown …

A contractor works on a home under construction in Brampton, Ontario.

Do two robust-looking reports in as many days merit a clean bill of health for Canada’s housing market? Maybe, maybe not.

News on Tuesday that work started on almost 200,000 homes in June — better than the forecasted 187,000 — was greeted by some economists as another indication that Canada’s closely watched housing market is successfully negotiating a soft landing.

Tuesday’s data came on the heels of an unexpected 4.5% increase in building permits in May, announced Monday. Permits had been expected to decline around 5%.

But economists are so divided about Canada’s housing market that data on it have come to be viewed in a way similar to the Rorschach ink blots used by psychologists — what they say about the market depends on your point of view.

Those who believe the market’s still vulnerable to a sharp correction did not see Tuesday’s starts data as signifying it’s landing softly.

“The recent condo-surge which propelled housing starts to levels above demographic requirements in the second quarter is not convincing evidence that the housing slowdown is over,” Capital Economics said in report.

“More timely indicators show that new housing demand is still falling sharply while excess supply mounts,” says the economics research firm, which forecasts that housing prices in Canada will drop by about 25%.

New condo sales in the first quarter in Toronto declined by a whopping 55%, CapEcon says.

Even if the data point to sustained strength in housing, that could be interpreted as a disturbing sign growth in Canada is too dependent on the over-stretched housing market and its heavily indebted households, economists at Desjardins Security say.

Desjardins says housing-sector strength implies an “unhealthy Canadian growth profile, driven by housing, amid what looks to be still weak business investment in [the second quarter].”

The Bank of Canada and the finance department have for several quarters been trying to nudge businesses to spend more, giving the over-extended household sector time to bring its borrowing down from recent stratospheric highs.

Desjardins believes the central bank is likely to continue to stress the limits of the current growth model in its policy statement and quarterly policy report next Wednesday, and maintain its rate-tightening bias as a “vigilance signal” for Canadian households. 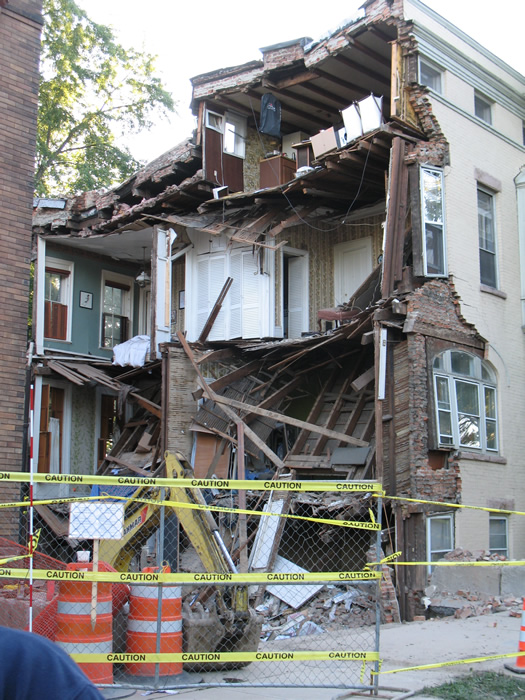 Is An Emerging Markets Crash Ahead?

In my investing career I have witnessed a number of calamitous events, which have greatly impacted Emerging Markets:

Note these crises pop up once every four years or so and as such I think I am about to see my fifth. Given all the money that has flowed into the EM trade despite deteriorating fundamentals, I think this one could be pretty nasty.

Readers of my newsletter and Seeking Alpha followers have read for the past year certain asset classes which I fundamentally disdain. This list includes many Emerging Market proxies such as Canadian and Australian real estate (and their currencies), the British pound (FXB) and Russian ruble (and Central London real estate), as well as certain Emerging Market countries such as India, and South Africa, that I believe are on the verge of blow up and which I plan to write about in more detail in the near future. Conversely, I have also been a fan in the relative value of U.S. assets such as U.S. residential real estate and bonds (although that view has moderated).

There are some very simple reasons as to why I am mega-bearish on the Emerging Markets complex.

The first reason pertains to credit conditions. There is currently an incredible divergence between U.S. credit conditions – which have been somewhat resilient – and EM conditions, which continue to deteriorate. The first chart is an approximation of EM sovereign credit spreads. The chart clearly shows a rapid deterioration in credit spreads with the all important 6-month Rate of Change clearly negative and set to stay negative (absent a sharp move back up). 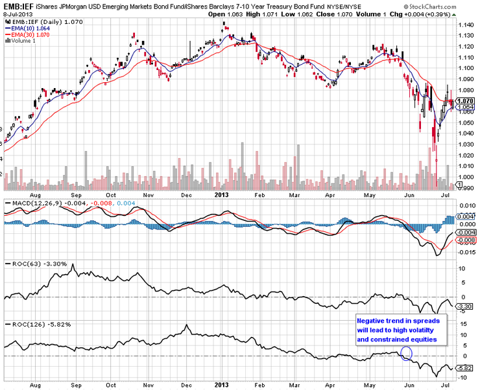 If a Housing Correction Comes, Scotiabank Is the Best-Positioned of the Big Five

With claims that the Canadian housing market is overheated and lurking in bubble territory with a collapse imminent, along with the threat of a slowing Canadian economy because of diminishing demand for commodities, the profitability of Canada’s banking sector is under threat.

With the majority of market share split between them, those banks that will feel the biggest impact will be the Big Five: The Royal Bank of Canada (TSX:RY), Toronto-Dominion(TSX:TD), Bank of Nova Scotia (TXS:BNS), Bank of Montreal (TSX:BMO), and theCanadian Bank of Imperial Commerce (TSX:CM).

That would suggest that the housing market is vulnerable to a steep downward correction, which would have a significant impact on the profitability of Canada’s banks. A key catalyst for such a correction would be a slowing Canadian economy on the back of diminished demand for Canada’s commodity exports which make up a significant percentage of total exports.

A recent Motley Fool article highlights the contagion that a housing market crash would create with Canadian households addicted to debt. Already, household debt as a share of disposable income has hit a record high, and any steep correction in prices would impact the wealth of many Canadians making not the housing bubble but the high degree of leverage of households the key risk.

Obviously, a steep contraction in Canadian housing prices would have a significant negative impact on the performance of Canada’s banks, as demand for credit dries up and non-performing loans rise. With 65% of total market share of Canada’s mortgage market, the Big Five would be under threat.

Despite Scotiabank being the second-largest mortgage originator in Canada, I do not believe that its profitability will be as severely impacted by a housing market downturn. Unlike the other Big Five banks, Scotia has a strong commercial banking presence in high-growth emerging markets, with significant operations in the fast-growing Latin American economies of Colombia and Peru.  This compares to TD, RBC, CIBC, and Bank of Montreal that have exclusively focused their commercial banking operations in Canada and the U.S.

These other four banks don’t have access to the lucrative growth opportunities that exist in Latin America and in particular Peru, which is one of the most under-banked countries in the region. Not only do they miss out on the opportunity, they are more highly exposed to the impact of a slowing Canadian economy or housing market correction.

A not so Canadian bank

The cornerstones of Scotia’s international operations are its controlling interest in Colombia’s fifth-largest bank, Colpatria, as well as a controlling interest in Mexico’s seventh-largest bank by assets, Credito Familiar. But Scotiabank’s flagship Latin American operation is in Peru, where it has been operating since 1997 and is now the third-largest lender. This gives Scotia solid exposure in the areas of commercial banking to two of the region’s fastest-growing economies — the IMF forecasts that in 2013 Colombia’s GDP will grow by 4%, Mexico’s by 3.5% and Peru’s by 6%. For comparison, Canada is forecasted to grow by 1.5%

These economies also have a fast growing middle-class, which is causing an explosion in demand for consumer products including demand for banking, insurance, and wealth management products. This is particularly true in Peru, which has seen its middle-class expand by 10% over the past 10 years. Peru also has one of the lowest levels of consumer debt in Latin America, underscoring the growth potential, with loans only representing 26% of GDP compared to 46% in Colombia, 71% in Chile, and more than 128% in Canada.

The significance of these operations for Scotia’s bottom line was underscored by its second-quarter 2013 results, where international banking contributed 34% of the $1.6 billion in total net income that it hauled in.  The segment also saw its revenue grow by 16% for the same period and net income was up by 12%, primarily driven by strong loan growth in Latin America. There is little reason to believe this international growth won’t continue.

Scotiabank’s international segment also operates far more cost effectively than a Canadian bank because of lower general and administrative costs.  A key contributor to the bank’s solid efficiency ratio of 54%.

There is growing evidence that a housing market correction in Canada is inevitable and a key driver of this will more than likely be Canada’s lower rate of economic growth, with the demand for commodities falling off significantly.

Canada’s Big Five banks will be impacted, but it’s clear that Scotia’s strong international operations, with a focus on Latin America, provide it with other avenues for growth. That should allow it to mitigate the possible effects of a housing slump on its financial performance.

« Where do millionaires live in Canada ?
Canada Cities Got Future »