Observers Say Market is Vulnerable to a Sharp Correction

Canada’s fragile economy means the Bank of Canada can’t safely raise interest rates, depriving policy makers of a traditional tool to keep the market from overheating. Instead, they have used a combination of tighter lending rules and verbal warnings, including the unusual rebuke of the banks in March 2013, to try to keep prices in check.

While it isn’t clear whether those moves have been enough, many credit Mr. Flaherty for taking some of the froth out of the market. 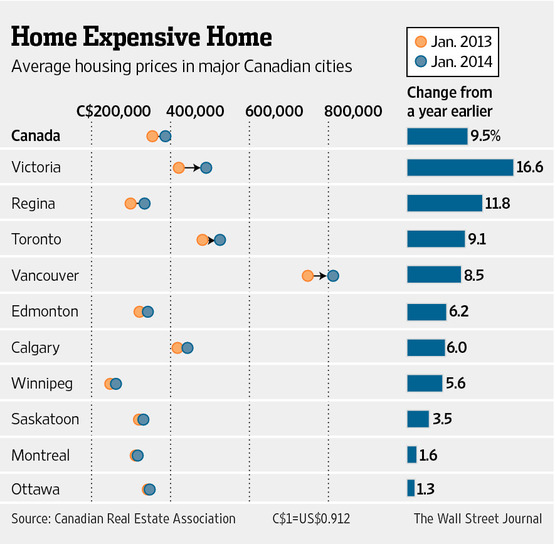 “The reality on the ground is that the government has definitely achieved a soft landing in housing,” said David Rosenberg, chief economist at Toronto money manager Gluskin Sheff + Associates Inc.

But many observers, including prominent economists such as Nouriel Roubini, think the market is still drastically overvalued and vulnerable to a sharp correction. The ultimate outcome of Mr. Flaherty’s bid to rein in prices without raising interest rates could be an important test of the ability of policy makers in Canada and elsewhere to avoid a repeat of the housing bust that contributed to the global financial crisis.

A condominium under construction in downtown Vancouver last year. Bloomberg News
The Canadian housing market’s expansion over the past dozen years has led to bloated personal debt and a construction industry that accounts for almost twice as big a percentage of Canada’s gross domestic product as the sector does in the U.S.

Canadian home prices have doubled since 2002 to an average of 388,553 Canadian dollars (US$353,873) in January, rising steadily except for a brief pause during the recession. Current prices are roughly 50% above those in the U.S.

Citing the risks of Canada’s housing market, some global investors have trimmed their exposure to Canada’s banking industry or taken short positions in the sector to protect themselves against any correction.

The next few months may bring more clarity about the market’s condition as data become available on the sales and prices in the spring, the crucial season in Canada’s market.

In Australia, home prices in major cities have soared as the central bank has sought to keep rates low to cushion the economy from the end of a long mining boom. New Zealand’s central bank tightened lending rules last fall after it said a hot housing market was the biggest threat to the country’s financial stability.

Instead, the Canadian government tightened mortgage rules four times in four years, the last time in July 2012. That last round had an initial impact of slowing the pace of sales and price increases in late 2012 and early 2013.

From 2008 to 2012, Mr. Flaherty implemented several changes, including reducing the maximum amortization period for a government-insured mortgage to 25 from 40 years, and lowering the upper limit that Canadians can borrow against their home equity to 80%. The changes helped generate a respite in housing activity as some buyers were forced to wait on the sidelines.

Then Mr. Flaherty took the extraordinary step last year of publicly rebuking Canada’s major banks for cutting fixed mortgage rates to near-record lows, a move that drew the ire of at least one bank chief.

But since last summer, prices have roared back and Mr. Flaherty hasn’t ruled out further action. Average home prices in Canada rose 9.5% in January from the same month in 2013, according to the country’s real-estate trade group.

Deutsche Bank said in December that Canada’s housing market was 60% overvalued after ranking several countries’ markets according to an average of two ratios: house prices to rent and house prices to income. Belgium and New Zealand weren’t far behind.

Still, not everyone believes the housing market’s climb means it is at a dangerous point. Canadian banks tend to see a modest domestic overvaluation, with Toronto-Dominion Bank putting it at about 7%.

Bank of Canada Governor Stephen Poloz recently told lawmakers he didn’t see a bubble. But he also has echoed his predecessor, the current Bank of England Governor Mark Carney, stating there was a risk that housing prices could continue to climb sharply and “set the stage for a sharp correction down the road.”

The central banker is in a difficult position as he confronts household debt and the housing market. With Canada’s economy growing at a lackluster pace, the central bank recently dropped a long-standing bias toward higher rates and shifted to a neutral position on monetary policy. The Bank of Canada’s benchmark rate has stood at 1% for more than three years.

Mr. Rosenberg—the former Merrill Lynch chief economist who became known for forecasting the U.S. housing collapse—said that while housing prices remain high, Canada’s six-month supply of housing based on current sales suggests that prices will remain stable. Canadian builders have curbed production more quickly than U.S. builders did before the bust there; some markets, such as luxury condos in Toronto and Vancouver, are more vulnerable to steeper corrections, he said.

Property developers, particularly those in robust markets such as resource-rich Alberta, remain positive about the market, but say they are aware of the possible effects of high prices.

Jim Bryce, vice president of sales at the Carlisle Group, a Calgary condo developer, said demand for new housing projects remains strong in Alberta, a direct result of the province’s booming oil and gas industry. But he notes that some buyers are being priced out of the market, and as a result Carlisle has focused on small, more-affordable projects. “From a construction standpoint, we’re looking good,” Mr. Bryce said. “We think a minimum price increase between 6% to 8% is very realistic this year.”

While the tighter mortgage rules may have discouraged some buyers, many continue to be enticed by low rates.

Lauren Posen, a Toronto-based recruiter at a software company, is looking for her first home, eyeing a condominium in the downtown core of Canada’s largest city. Ms. Posen says she isn’t that worried about a crash, nor does she feel much pressure to get into the market before mortgage rates climb higher. Instead, she is taking her time, looking to find a condo that suits her needs—a one-bedroom unit within walking distance of her downtown office and close to a subway line.