Looks like Canadian real estate is going through a midlife crisis?

Perhaps much more severe and complicated than that mere midlife crisis per se.

Average Canadian house worth $559317 last month, up 10% in past year – Canadian house prices continue to march higher, with the average price of one sold in April hitting $559,317 — an increase of more than 10 per cent in a year… CBC

And causing Social Screams as a result …

“My younger child is sleeping in my master bathroom,” said the mother of two, gripping the podium tightly. And then you hear things like “Home sales cool last month after record March … Canadian Home Sales Dropped in April Following Record Sales in March Mansion Global”, it simply means ales is going down south, even though price is still “handsome”.

Homeowners in several communities around Toronto – including the Greater Toronto Area itself – put a record number of homes up for sale in April as they rushed to cash in on soaring prices before the market peaked.

The Canadian Real Estate Association said the Greater Toronto and Barrie areas set records for new listings for any month on a non-seasonally adjusted basis. The Peterborough and the Kawarthas region saw new listings rise 32 per cent in April over March, while Kitchener-Waterloo recorded an 18-per-cent increase in new listings.

The listings spiked in the same month the Ontario government imposed a suite of new measures to cool the overheated housing market in the so-called Greater Golden Horseshoe Area, which covers a broad crescent of the province surrounding Toronto. One measure announced April 20 is a new 15-per-cent tax on foreign buyers who purchase homes in the Golden Horseshoe region.

Resales of Canadian homes fell 1.7 per cent in April from record highs in March as new listings spiked, the Canadian Real Estate Association (Crea) said on Monday in a report that suggested a long-awaitedcool in housing had begun.

The industry group said actual sales, not seasonally adjusted, were down 7.5 per cent from April 2016, while home prices surged 19.8 per cent from a year ago, according to the group’s home price index.

Sales declined in close to 70 per cent of markets, led by Toronto, where skyrocketing home prices had sparked fears of a bubble and prompted the provincial government to introduce new measures in April to rein in the market.

“Homebuyers and sellers both reacted to the recent Ontario government policy announcement aimed at cooling housing markets in and around Toronto,” Crea chief economist Gregory Klump said in a statement.

He said the number of new listings spiked to record levels in and around Toronto and far-flung suburbs, where a severe shortage of listings had helped drive prices higher.

“It suggests these housing markets have started to cool,” Mr Klump said.

New listings rose 36 per cent in the Greater Toronto Area and were up 10 per cent nationally, the report showed, helping to ease the national sales-to-new listings ratio to 60.1 per cent in April from 67.3 per cent in March.

A ratio between 40 and 60 per cent is considered balanced, and Canada’s housing market had been firmly in seller’s market territory for months.

There were 4.2 months of inventory at the end of April, up slightly from 4.1 months in March, Crea said.

Her comes the ultimate question …

On the one hand, a crash might be good for some Canadians already priced out of the market. And even a dramatic 40 per cent drop in prices would set homeowners in markets like Toronto or Vancouver back, what, two or three years?

But there are broader concerns for the market and the economy itself that could prove devastating.

Home prices are notoriously off the charts. Everyone from the governor of the Bank of Canada to the chatty guy in your local cafe has said, repeatedly, that this increase in prices is not sustainable. But what that means, precisely, is vague.

Like then, some owners would be largely unaffected by a crash today. Someone who isn’t going to move and has a lot of equity in the house would be set back, but given the enormous increase in house prices (33 per cent in 2016), they would have something of a cushion.

But housing isn’t just about prices. And that’s never more evident than during a downturn.

“I think the most important thing is the impact on the composition of economic growth,” says Karl Schamotta, director at Cambridge Global Payments. He says for 17 years, Canadian real estate, retail finance and construction sectors have significantly outpaced the rest of the economy. That cycle has fed on itself.

Were that cycle to stop or suddenly slow, the impact would stretch far beyond Toronto’s overheated housing circus.

Joblessness would spike, and it would be made worse by people’s reluctance to move for work because they are tied to monster mortgages for homes worth less than they paid, Schamotta says.

That would be bad for productivity, but it would also make Canada’s entire economy less able to react to global changes. And the loonie would likely fall, too, hurting imports while boosting exports.

And even those homeowners who have equity in their homes and don’t plan on leaving wouldn’t be immune.

Benjamin Tal, deputy chief economist at CIBC World Markets, says the important question isn’t how far prices would fall, but why they fell in the first place. If prices fell because Toronto’s well established supply issue was sorted out, that could actually prove positive for the economy.

But if they fell as a result of a quick rise in interest rates, as happened in the United States in 2006, the impact could be severe.

“The higher interest rate environment would lead to a significant increase in debt financing as opposed to other spending,” says Tal. That would require people to spend more covering their mortgage and leave them with less to spend elsewhere in the economy.

“Then you get into a consumer-led recession. And this would lead to increased unemployment and people defaulting and continued decline in prices. That’s the worst scenario.”

Based on this theory, it’s not hard to see why a double-digit correction in prices could cascade through other parts of the economy, “and that can feed on itself,” says Tal.

On the upside, just about everyone agrees that nightmare scenario is still unlikely. Prices are slowing in Toronto and Vancouver. And Tal says one big difference between today’s situation and the U.S. housing crash is that everyone in this country is trying to slow down the market.

One thing for sure, times are still good. At least it appears so … Positive Thinking is the name of the game. So, buy while everyone else hesitated.

Anyway, let’s see what is going on the market today … 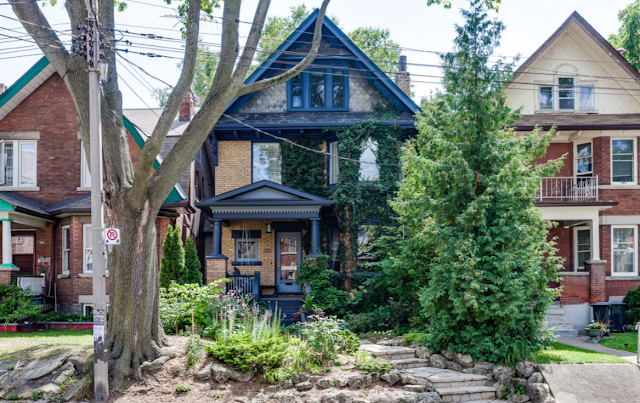 Last Monday, this 4+1 bedroom, 2 bathroom house on a 26.7 x 132 foot lot at 223 Wright Avenue in Ronvesvalles.
It was a good looking house (perhaps better without the ivy) and if you were into the broody style inside…
It was perfect.
As mentioned, some paint and removal of some of the dark wallpaper with perhaps a lighter counter top in the kitchen could completely transform the house if you weren’t into the steampunk look.
It was listed at $ 1,499,000.
Even though it only had 2 bedrooms, I thought it would sell around $ 1,685,000.
Turns out, 3 people didn’t care that there were only 2 bathrooms because this house sold for $ 1,803,000.
What slowdown?