It’s the doctor versus the governor in the ongoing debate over the direction of Canada’s housing market.

On the pessimistic side there’s Nouriel Roubini, the man known as “Dr. Doom” for his pessimistic outlook on the global economy. He recently pinpointed Canada’s housing market as a bubble set to pop.

Canada is in the company of other housing markets that Roubini (known as one of the few to correctly predict the U.S. housing crash) says are showing “signs of frothiness, if not outright bubbles,” including Switzerland, Sweden, Germany, Australia and New Zealand.

More optimistic is Bank of Canada governor Stephen Poloz, who reiterated again last week that he doesn’t see a bubble. Instead, he believes there will be a gradual slowing of sales activity in the years to come.

“The bank continues to expect a soft landing in the housing market,” he said, repeating calls economists have been making for the past several months.

So far, predictions on both sides are proving to be incorrect as Canada’ housing market continues to defy expectations. That’s despite rising borrowing rates being offered by the banks and government moves to tighten mortgage conditions to prevent a U.S.-style crash.

“2013 was a year of pleasant surprises for Canada’s housing market,” BMO Capital Markets senior economist Sal Guatieri said in a recent note. “Far from extending last year’s deep sales dive on mortgage-rule turbulence, the market pulled up sharply and is cruising at an above-normal altitude.”

Even the major cities expected to drag down the data, namely Toronto and Vancouver, have outperformed, BMO notes.

In Toronto, Canada’s largest city responsible for about one-fifth of national sales, BMO says activity is up 20 per cent year-over-year for the months of August-to-October, as prices continue to climb.

That’s despite ongoing calls for a crash, particularly in the condo market where overbuilding of units has been an ongoing concern.

“The number of newly built, unoccupied condos is not high when normalized for population growth,” Guatieri writes. “For the most part, markets are balanced, but sellers rule and bidding wars prevail in certain pockets where listings are scarce.”

In high-priced Vancouver, which many believe has the greatest risk of a housing collapse, the market has bounced back strong from a dip in sales earlier this year.

Sales were down 33 per cent at the worst point earlier this year, but have since “pole-vaulted” 50 per cent to “near normal levels,” says BMO.

Overall, Canada’s housing market is rebounding across the country with sales up about 8 per cent in October compared to the same time last year, according to the Canadian Real Estate Association. Preliminary data for November also shows continued strength in sales.

Both the cautious and the extremely pessimistic camps have yet to be proven correct in their calls for Canada’s seemingly unpredictable housing market.

Eventually, one side will claim victory.  Which one remains anyone’s guess.

Meanwhile,
Actress Salma Hayek listed her Hollywood Hills home for rent at $9,500 a month. Hayek bought the residence for $537,500 in 1996, after her breakout role “Desperado”. It features an open floor plan. 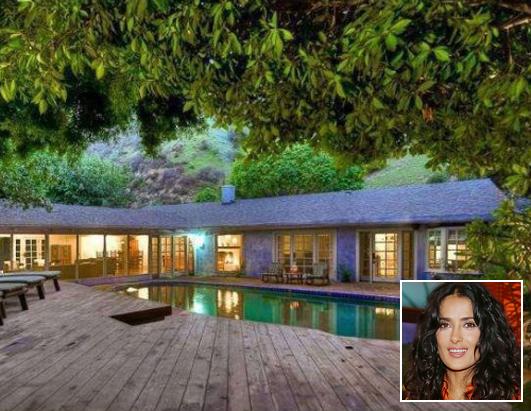