The average price of a Canadian home has risen to more than $400,000, according to new data released on Monday.

The Canadian Real Estate Association said Monday the average price of a resale home was $406,372 in February. That figure is 10.1 per cent higher than what it was the same month a year earlier.

CREA says the number was skewed higher because sales were significantly lower in some of Canada’s largest and most expensive real estate markets this time last year, and that makes comparisons appear larger than they would otherwise have been.

“This phenomenon was particularly clear this month, with Greater Vancouver having posted the biggest year-over-year increase in activity by a large margin,” CREA said.

Price gains were not distributed evenly across the country. There were strong increases in Toronto, Calgary and Vancouver, but prices fell in Winnipeg, Regina and Quebec City.

While prices were up significantly, the actual number of homes sold only inched up by 0.3 per cent during the month. That reverses a trend of five consecutive monthly declines.

Home sales are 9.2 per cent below the recent peak seen in August 2013, but the housing group says it expects sales to pick up in the spring. 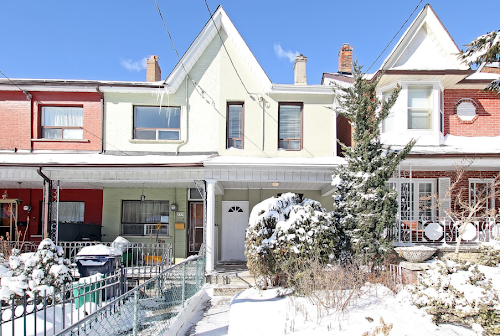 It is not a wide house….at all.

But it is a good house.

Like this house, it was 13 feet wide.  But because of the stair placement, it felt larger.  And the kitchen was better (except I just noticed the fridge opens the wrong way).  And it had a garage, not just a parking spot.

The row house at 23 Gordon Street in Little Portugal sold for $599,000 and it was a row house with no parking in a less desirable neighbourhood.