By The National Bank of Canada

Summary• At the national level, the resale housing market appears balanced on the whole. The ratio of listings to sales stood at 6.1 months this past July and has shown little variation in almost two years.• However, this stability at the national level masks a recent softening of the market (reflected in a significant increase in the listings-to-sales ratio) in Canada’s three major metropolitan areas. In Toronto and Montreal, the condo market is primarily at fault; in Vancouver, the entire resale market is concerned.

• This softening of the resale market in the three major metropolitan areas is occurring in conjunction with a high level of dwellings under construction. In the case of Toronto, we also know that the number of condos unsold (including those for which construction has yet to begin) has surpassed the previous peak reached at the end of 2008. Under these circumstances, we believe that developers will like to see some of the unsold supply absorbed before launching new projects.

• The caution that developers will exercise will contribute to a decline in the overall construction of new dwellings in the country as a whole. For all of Canada, then, we expect housing starts to reach 180,000 in 2013, down from 206,000 in 2012.

Resale market
At the national level, the resale housing market appears to be balanced. According to the Canadian Real Estate Association (CREA), in July, the ratio of the number of homes listed for sale to the number of homes sold stood at 6.1 months after adjusting for seasonal variations. The ratio was unchanged versus June and has fluctuated very little since September 2010.

It need be reminded that the inventory of homes for sale represented nearly ten months of sales at the onset of the recession in December 2008 (buyer’s market) and a low of just over four months of sales in October 2009 (seller’s market). 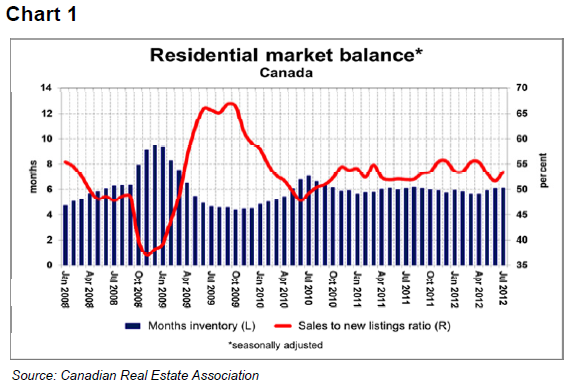 However, the data show considerable variation in the state of affairs from region to region. In the Greater Toronto Area, for example, the resale market remained tight from the end of 2010 until very recently when the situation began to change, especially regarding condominium apartments. According to the Toronto Real Estate Board
(TREB), sales in this segment were down 11.7% in July from their level the year before while active listings were up 27%.

Applying these variations to sales and active listings in 2011Q3, we obtain, one month into 2012 Q3, a ratio of 4.1 months of active listings relative to sales. This is a historically high figure for the Toronto condo market outside periods of recession.

The TREB announced also that, in July, the median sales price of condo apartments stood at the same point it was at in July 2001. Such an occurrence has very seldom been witnessed in the past 15 years outside periods of recession. 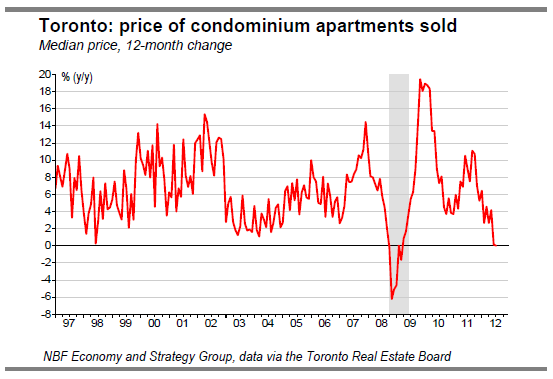 Let us now take a look at the resale market in the Greater Vancouver Area. The latest report by the Greater Vancouver Real Estate Board (GVREB) covering July indicated that active listings were up nearly 19% in the past year while sales were down 18%. If we apply this information to seasonally adjusted sales and active listings in 2011Q3, we obtain, one month into 2012Q3, an inventory of homes for sale representing eight months of sales.

This, too, is a historically high figure. Unfortunately, the data published by the GVREB does not allow computing a similar estimate for the condo market. However, CREA data up to 2012Q2 show that this segment has been following a course similar to that of the market as a whole.

« Canada’s outlook is a bit bleaker in part because consumers are trying to pare down their debt loads
Even Canadian government is speculating on real estate ? »