Poor US, Canada doesn’t seem to have such problem … Jim Flaherty is happy to tighten our mortgage rulings, and Stephen Poloz is okay to keep the younger generation out of housing market … Canada is simply better. Live with it.

The housing recovery faces headwinds because it’s too hard to get a mortgage today, which in turn is restraining economic growth, and the government is partly to blame, according to a paper from a top economist and a former White House policy adviser. 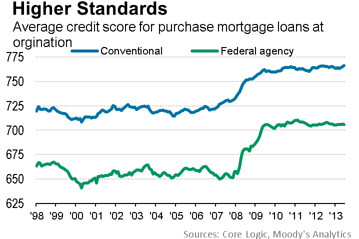 The authors are quick to note that they aren’t advocating a return to the anything-goes school of lending that prevailed from 2004 until 2007, but they argue that the pendulum has swung from too far in the other direction. The paper was written by Jim Parrott, a former housing advisor in the Obama White House who is now a senior fellow at the Urban Institute, a left-leaning think tank, and Mark Zandi, chief economist of Moody’s Analytics.

The clearest sign of tighter credit standards are seen in average credit scores, which in June stood nearly 50 points above their pre-housing bubble levels. Credit scores are not only higher, but they also understate the quality of recent borrowers, who have earned these scores during a much tougher environment. In the early 2000s, borrowers had an easier time building their credit because unemployment was low and home prices were rising. In other words, a 750 credit score coming out of the financial crisis counts for more it did ten years ago.

Easing lending standards to return credit scores to pre-bubble levels would boost home sales by around 450,000 units and new single-family home construction by around 275,000 units, according to estimates from Zandi. The increased construction and the benefit of higher home prices, he forecasts, would over time reduce the unemployment rate by 0.4 percentage points.

“Normalizing credit scores will not, by itself, get the economy back to full employment, but it would go a long way and, at the very least, cushion the negative fallout from rising interest rates,” the paper says.

To be sure, not everyone agrees that credit standards are too tight. Some mortgage bankers have argued that borrowers simply have too much debt and that incomes aren’t growing fast enough. Rather than a “tight credit” problem, this counterargument goes, the country has a “weak borrower” problem.

Parrott and Zandi concede there’s little evidence that credit is tighter based on either average loan-to-value ratios and debt-to-income ratios. But they say there are other problems, particularly around banks’ verification of borrowers incomes, scrutiny of appraisals, and other factors that have led to a tighter credit box. They outline four basic explanations for tougher credit standards:

First, banks are naturally skittish to expand their tolerance for credit risk given what the country just went through.

Second, ultralow interest rates spurred a refinancing boom, giving banks more mortgage business than they can handle. That boosted profits, minimizing the need to compete for home-purchase loans, which tend to be more time consuming. There are already some signs that big declines in refinancing will lead banks to ease up lending standards at the margins.

Third, it’s become more expensive to process loans that default. While banks typically sell to other investors the mortgages they make, they often hold onto what’s known as the mortgage “servicing”—that is, the process of collecting loan payments on behalf of investors. Because the foreclosure crisis has led to higher costs associated with servicing delinquent loans, the easiest way to avoid against having to service a defaulted loan, of course, is to make risk-free loans.

Fourth, banks have faced demands from investors and mortgage insurers to repurchase loans that are later found to run afoul of agreed-upon underwriting standards. Fannie Mae and Freddie Mac have forced banks to repurchase tens of billions of delinquent mortgages since 2009. Parrott and Zandi explain:

This aggressive turn is not itself a problem. Under normal circumstances, lenders could adapt to changing regulatory conditions by improving their quality control or raising prices to reflect increase risk.

The problem is that Fannie, Freddie and the [Federal Housing Administration] have stepped up their put-backs in ways that lenders cannot address adequately through better underwriting or pricing. This includes disagreements over judgment calls made by lenders or their agents; changes in circumstances occurring after the underwriting process has been completed; small mistakes that bear little relation to either the credit risk or the subsequent default; and inconsistent interpretations of the rules.

The upshot is that because lenders can’t predict how they could be penalized, they’ve chosen to lend less. This last point is the most important, the authors said, because it’s the one where policymakers can exercise the most control.

But the problem is difficult to solve because it’s not as easy as changing specific lending criteria. As it is, banks are putting in place standards that go beyond those required by Fannie, Freddie or the FHA. What’s needed instead, the authors argue, is better clarity around when banks could be forced to take back loans. Regulators overseeing those housing entities, they write, “must embrace the challenge with a good deal more urgency” than they have so far.