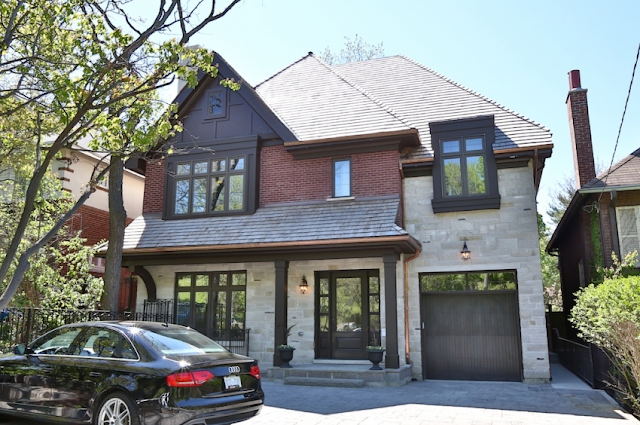 This 4+1 bedroom, 7 bathroom house on a 25 x 258 foot lot on a ravine lot in Lawrence Park has been listed since June.

Why farmland is a good bet in Canada ?

By the way, Canada used to give land away for free to the immigrants from Europe. You didn’t heard it wrong, Canada got much land, she used to give it away for nothing.

Buy land, advised Mark Twain, because, as the punch line goes, they ain’t making any more of it. Fast forward to 2013 and that advice, as a look at prices for farmland shows, seems as prescient as ever.

As any farmer will readily tell you, the agriculture business has had a tough run. Agriculture was once an economic mainstay. Turn back the clock to 1950 and the sector employed nearly a fifth of Canada’s work force. Today, agriculture accounts for less than 2 per cent of the country’s employed workers, while its share of gross domestic product is also a shadow of what it once was. Farm prices have languished for decades, as Canada’s population has shifted from rural to urban. By the 1990s, North America was losing two acres of productive farmland to development every minute.

How the world has changed for Canada’s farmers in 2013. The hottest sector of the country’s real estate market is, you guessed it, farmland. The price of farmland in Canada has outpaced both residential and commercial real estate, gaining an average of 12 per cent over the last five years. In some hotspots, such as southwestern Ontario, the price-per-acre has been going up by as much as 50 per cent a year. Even pension plans and hedge funds have become players in the pursuit of prime agricultural land, interest that is only sending prices that much higher.

If global food prices are any indication, such investments could be a solid bet. Over the last decade, global food prices have more than doubled, according to the United Nations FAO Food Price Index, which tracks monthly changes in prices for international food commodities. The food riots stemming from that price inflation were part of the spark that set off the Arab Spring. So far this year prices have been falling, but they still remain within shouting distance of the record highs reached in 2011.

The strength in global food prices is no accident. The growth in global food demand is unrelenting. Part of the reason is due to population growth. The world is at 7-billion people and counting. But that’s not the only thing straining food supply. World grain demand has also soared, as households in fast-growing Asian countries trade in rice bowls for cheeseburgers. It takes seven pounds of grain to raise a pound of beef. That’s a whole lot more than it takes to make a loaf of bread. The newfound economic clout in emerging economies such as China and India, which between them have roughly 2.5 billion people, has allowed more people to diversify their diets. In turn, global meat consumption has bounded ahead at double the rate of population growth over the last two decades.

All that demand for protein bodes well for the world’s breadbaskets. That is if Mother Nature doesn’t get in the way first. A severe drought a few years ago forced Russia, the world’s third largest producer of wheat, barley and rye, to suspend grain exports for nearly a year. Before that a drought in China caused a spike in grain prices that affected everything from the price of pasta in Italy to the cost of tortillas in Mexico. Closer to home the US Midwest has been grinding through one of the worst droughts in more than half a century.

Climate change scientists warn that droughts and other agricultural shocks will be even more common in the future. Against a backdrop of climbing temperatures, Canada sits in an interesting spot. With a wealth of arable land and 7 per cent of the world’s fresh water, Canada’s agricultural potential is considerable. It’s also possible the amount of land under cultivation in Canada could actually increase as global temperatures continue to rise and the wheat belt climbs farther north.

Could it be that in the coming years we’ll also see farmers actually start reclaiming acres from far-flung suburbs? The idea is much more plausible now than it was only a few years ago. It was depressed farm prices that allowed prime agricultural land to be paved over in the first place. As food becomes more precious and more expensive, it will only add to the market forces that will push some of those farms to come back.

Jeff Rubin is a former chief economist of CIBC World Markets and the author of the award-winning Why Your World Is About To Get A Whole Lot Smaller as well as The End of Growth.

CanucksAbroadGee, Jeff, do you really think that a lot of those Hindu in India are wolfing down cheese burgers? Or maybe more likely it is Chinese eating more pork that will stimulate demand for corn and not wheat. Wheat is mainly for human consumption (at the margins) versus corn for animal feed.

Converting urban sprawl back into arable farmland? Really? After all the topsoil has been completely scraped off? You give economists a bad name with your lack of understanding about the underlying physical markets you try to talk about. It is embarrassing.

tail end charlie1Canadians may have a wealth of arable land and water, but at the rate we are sqandering it with roads and housing developements, that wealth is not being managed. Yes, people have to have a place to live, but there are many marginal lands that are not developed because it is more costly, and immediate profit rules. All levels of government are so shortsighted in their race to collect money and votes, that they have have forgotten to govern in the best interests of the country.

Read more @ The Globe and Mail

« Got house for sales ? Canadians will buy anything, even craps
Bank of Canada: “Interest rate will go up soon. So, spend like there is no tomorrow” ? »