Warnings about a potential housing bubble in Canada haven’t held back the wealthy from snapping up homes across the country.

According to the RE/MAX Upper End Report, 75 per cent of the 16 markets surveyed saw sales increases over the past year and eight of them posted double-digit gains.

Vancouver, the country’s most expensive market, led the market with a 36-per-cent jump in high-end sales. It was also home to the most-expensive sale of the year, which was a three-bedroom, two-level condo valued at about $25-million.

Greater Vancouver also experienced the largest bounce back in sales, with luxury homes posting the second highest year on record, which was 1,690 properties each valued at more than $2 million, RE/MAX says.

While sales have surprised across the entire housing market in recent months, Dansereau called the increase in luxury homes “striking.”

“From high-end homes to condominiums, the market is evolving,” she said. “It’s not only raising the bar, but price tags in the process.”

Since the recession ended in 2009, sales grew a whopping 288 per cent in Regina, 219 per cent in St. John’s and 157 per cent in Saskatoon, all cities boosted by money coming in from the lucrative oil and gas industry.

Low interest rates have also spurred demand for housing in all areas of the market. Rising mortgage rates are also said to be sending buyers into the market as they look to take advantage of lower, pre-approved rates.

The luxury market is also being buoyed by an increase in equity markets that has padded the portfolio of many investors, particularly those with money in the U.S.

RE/MAX also pointed to the growing number of millionaires in Canada, up 6.5 per cent to 298,000 people in 2012 compared to a year earlier, citing the CapGemini report. Foreign investors are also helping to driven sales activity, particularly in markets such as Vancouver and Toronto.

RE/MAX says a reduced supply of single-family homes in big cities such as Toronto kept homebuyers active in the market.

While some argue all of this activity points to the frothiness of the Canadian market, RE/MAX sees it differently.

“Most purchasers remained grounded, especially at higher price points,” it stated in its report, “and the climate proved fundamentally healthy.”

Article like the below receives a … “Bah”, for now.

Today I am making a working paper available that summarizes some results from my dissertation (you can download the paper here).

The basic story is that the consumer price index doesn’t use house prices to measure inflation in owner-occupied housing, and instead they impute inflation using housing rents. This means there can be big discrepancies between house prices and housing inflation as measured by the CPI. For example, from the peak in April 2006 to the first bottom in May 2009, the Case-Shiller house price index fell 32%. In comparison, the CPI for owner-occupied housing increased 9% over this period.

I’m not addressing the overall desirability of the rental imputation, but rather I argue that the way the BLS can improve their rental imputation methodology to help the CPI better reflect the housing market.  The improvement I’m suggesting is to account for the nominal rigidity of rents by looking at current market prices instead of average prices. The current practice is to survey households about their current rent expenditures, but most of these expenditures are based on leases that reflect prices which are set in the past. This is kind of (though obviously not entirely) like looking at changes in average household mortgage payments to gauge current housing market prices. A measurement based on market rents, in contrast, would reflect the prevailing market rents that are charged, and would therefore better reflect current housing market conditions.

The overall conclusion of my work is that yes, a market rent series better reflects the bursting of the housing bubble. You can see this in the figure below which compares the Case-Shiller house price index for the Baltimore/Washington D.C. CMSA (right axis, blue line), to the BLS measure of owner-occupied housing inflation and my estimated market rent series, both for the same geography. 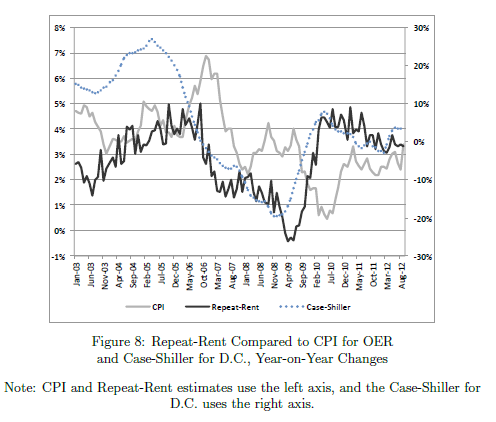 Its certainly true that the majority of the difference between house prices and rents can’t be accounted for by this methodological choice (therein lies cap rates), but these results do suggest that the methodological change would help reflect market turning points sooner. In particular, the drop in prices when the bubble burst would have been reflected in the CPI sooner if market rents were being used.

While there is much research to be done here, overall I think the results suggest that switching to this kind of measure could help the Federal Reserve and other policymakers respond faster to falling prices that result from a bursting housing bubble.