Where You Can Buy an Affordable House in Toronto

With home prices skyrocketing in recent months, many home buyers are wondering if they will ever be able to afford a house in Toronto. In many desirable neighbourhoods, prices have already increased beyond what most people can afford. However, there are still some pockets in Toronto where value can be found. Here are 3 places to look for an affordable home in Toronto:

Stockyards
This area, which is along St. Clair Ave W between Keele St and Jane St is home to one of the few big box store complexes in Toronto, including a brand new Target location. It has good transit access via the St. Clair streetcar, and is within walking distance of the popular Junction and Bloor West Village neighbourhoods. Part of the allure is that most of the houses in this area are on very quiet streets with only local traffic. This is a great spot for a young family, as almost everything they need can be found just steps away.

Vaughan Road
Vaughan Road runs northwest between Bathurst St and Oakwood Ave. This neighbourhood has a lot to like – proximity to downtown, transit access, and good-sized homes on decent sized lots. This is a place where you can still own a detached house with a backyard for under $600,000. There is an influx of young families moving to this area, and the population is rapidly changing. It also borders on Forest Hill, and the popularity and high prices there will eventually flow over to its neighbours.

Mimico
This neighbourhood along Lake Shore Blvd W between Parklawn Rd and Islington Ave is a bit more expensive that the other places mentioned above, but it has perhaps the most to offer. Houses in Mimico are often fully detached and have huge lot sizes and a true neighbourhood feel. Lake Shore Blvd W is also quickly improving, and many of the dollar stores and money lending shops are turning into local bakeries and coffee shops. Transit is also easy to access as a streetcar can take you straight downtown, and there is a Go Station as well. Something many people don’t realize is that Mimico is actually only slightly further from the downtown core than the much more established Beaches neighbourhood. Mimico offers great waterfront parks and trails for a much lower price that the Beaches.

The truth about houses in Toronto is that demand has outstripped supply, and house prices are going up every single day. While the days of finding a hidden gem for an incredibly low price are long gone, these are some neighbourhoods that are priced reasonably and have great long term potential. 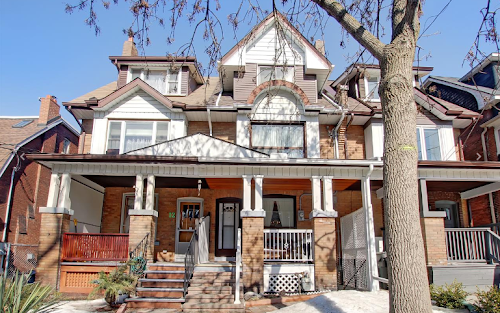 AND IT WENT FOR – 10 Constance Street – RONCESVALLES

Last week, I psosted this 4 bedroom, 3 bathroom row house on a 16 x 100 foot lot at 10 Constance Street in Roncesvalles.

I really liked the looks it from the outside, but the inside had a bit too much brown.  And purple.

It had a lot of potential though, even if there was no parking.

I thought this would go over ask.