Home construction in Canada staged a surprising spring resurgence in May, particularly in the seemingly overbuilt condominium market, defying expectations of a slowdown and even deep correction.

Nearly half of Canadian homeowners eager to buy property

Undeterred by record-high housing prices and bolstered by low borrowing costs, nearly half of Canadian home owners plan to buy a property in the next five years, although intentions vary sharply from city to city, a poll released Wednesday has found.

According to a Bank of Montreal survey, 45 per cent of Canadian homeowners surveyed this spring are looking to buy a place in the next five years, a level that did not change from the fall of 2012. The percentage of homeowners planning to buy in the next year also remained stable, edging 1 per cent higher to 7 per cent.

Canadians in Calgary were least eager to buy, with intentions there dropping by 13 points from the fall of 2012 while those in Atlantic Canada were the most eager, with buying intentions rising 15 points. Intent to buy among homeowners in Vancouver climbed by 5 points and in Toronto by 2 points.

Bank of Montreal economist Sal Guatieri attributed the perception of improved affordability to rising incomes. “Job growth has been decent in the last year, so income has been rising,” he said in an interview. In addition, he noted that the runup in house prices is slowing.

“In Calgary, house prices have picked up… because people are moving to that city and taking advantage of the oil sands,” he said. “Valuation is pretty good in Calgary,” he added, where house prices have gone through a correction after peaking in 2007.

However, Mr. Guatieri said that in the detached home markets in Vancouver and Toronto, affordability remains an issue and high prices are forcing buyers into the condo market. Prices in Vancouver have dipped recently, he said, but for most people it is still “very pricey” to buy something in that city.

House prices hit an average national record high of $380,588 in April, according to the latest data from the Canadian Real Estate Association.

Despite fears of a major slowdown similar to the one that triggered a recession in the United States, there are signs that Canada’s housing market is headed for a soft landing. Sales this spring are forecast to edge higher, putting an end to years of frenetic activity and huge price gains.

“The housing market in most regions is still very affordable, because of low interest rates – that is why people are still buying,” Mr. Guatieri said. “Going forward, we expect prices to stabilize. And of course cities that are richly priced, they are vulnerable to price corrections.”

John Andrew, a real estate professor at Queen’s University in Kingston, Ont., said the high cost of real estate transactions make it unlikely that nearly half of all Canadian homeowners will make a move in the next five years.

“A lot of people do not realize how high the fixed costs of moving really are,” he said. Once you factor in real estate commission fees, lawyer costs, land transfer taxes as well as the cost of the actual move, it adds up to a “staggering number.”

And although interest rates are still low, they might not be five years from now, Prof. Andrew added.

The online interviews of 1,008 Canadian home owners conducted by Pollara for BMO in February asked them about intentions to do with buying or selling their primary or secondary properties, price expectations, and mortgage affordability.

Lastly, 10 per cent of homeowners plan to sell their home and move to a rental property, retirement community or in with family, according to the poll.

The BMO survey also asked homeowners if they have cut back their spending or dipped into their savings to make their monthly mortgage payments. It found that the number of people who needed to do so has fallen 10 points from last fall to 45 per cent this spring.

ROMA LUCIW – The Globe and Mail

A Look Behind Canada’s Near Record-Breaking Employment Report

Let’s start by taking a look at the highlights from the latest employment report that got everyone so excited:

The immediate investor response to this employment report was predictable. Markets are made at the margin and an employment report that comes in ten times higher than the consensus forecast can certainly be expected to push bond yields higher over the short term.

Investors were quick to speculate that a surge in our monthly employment data may be a signal that our labour market is entering a tightening phase. Since there is an 80%+ correlation between rising labour costs and rising inflation, higher interest rates won’t be far behind if this tightening trend comes to fruition. But does this sudden spike in employment signal the onset of higher inflation or is it just a one-off blip?

As I read about the details in the report, I began to suspect the latter. Here are the factors that led me to that conclusion:

Five-year Government of Canada (GoC) bond yields rose nine basis points last week, closing at 1.57% on Friday. Interestingly, yields had been down four basis points by close of business on Thursday but surged fourteen basis points higher after Stats Can released its latest employment data. Lenders scrambled to raise their five-year fixed rates in response, so for the time being, borrowers are going to have to tolerate five-year fixed rates that are now slightly above the lowest in history.

Five-year variable-rate discounts are offered in the prime minus .45% to .50% range (which works out to 2.55% to 2.50% using today’s prime rate). Variable-rate mortgages are marginally more attractive now that the spread between five-year fixed and variable rates has widened somewhat.

The Bottom Line: When a key piece of economic data smashes expectations as our latest employment report did on Friday, investors tend to shoot first and ask questions later. While their initial reaction was to sell off GoC bonds, pushing their yields higher, I’ll be surprised if there is much follow through this week for the reasons listed above. If I’m right, then any uptick in bond yields and, by association, our mortgage rates will be short lived.

David Larock is an independent mortgage planner and industry insider specializing in helping clients purchase, refinance or renew their mortgages. David’s posts appear weekly on this blog (movesmartly.com) and on his own blogintegratedmortgageplanners.com/blog).

Why a U.S.-style housing nightmare could hit Canada 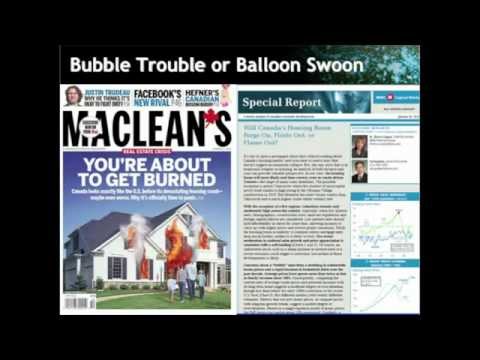