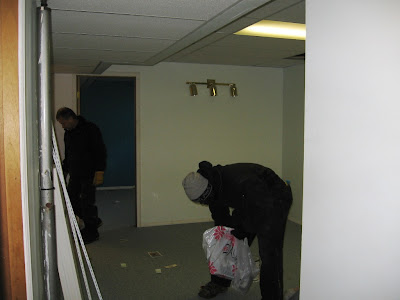 Canada’s obsession with home improvement is starting to fade due in part to rising interest rates and debt levels, but also because we’re running out of rooms to refurbish, a new report suggests.

After about a decade of redoing kitchens and bathroom, TD Bank predicts renovation activity will slow for the rest of this year and next.

Home renovation spending has grown 7 per cent a year for the past decade, but will fall to half its historical rate for the rest of the year and throughout 2014, the bank says.

“In 2015, the combined effect of higher interest rates, elevated household debt levels and a cooling in housing markets is likely to lead to a modest dip in renovation outlays,” TD Bank economist Diana Petramala said in a note.

Still, she says the $45 billion in total renovation activity expected by 2015 is still more than double its level of a decade ago.

Canadians’ rush to renovate happened alongside a home buying surge over the past decade, driven by rock-bottom interest rates. That also spawned a number of reality shows such as Property Brothers, Holmes on Homes and the Do It Yourself Network, which further fuelled the home renovation frenzy.

The economic importance of the sector has also skyrocketed over the past 20 years, notes Petramala.

Citing Statistics Canada data, she says home renovations account for nearly 40 per cent of total residential investment today, up from 25 per cent in the 1990s.

But that is expected to moderate in the coming years, with the exception of work done to benefitBaby Boomers as they age.

“While home improvements to add quality and value to ones home were likely more popular forms of spending over the last decade, renovations to help make homes more accessible for seniors are expected to be a bigger source of renovation activity over the longer term,” Petramala writes.

For the rest of the population, renovations are expected to slow now that we’ve updated much of what we own.

“There will probably continue to be a significant share of remodeling projects. However, the recent string of new homebuilding and renovation spending has left the Canadian housing stock in the best condition in decades,” Petramala says.

About a quarter of current housing stock in the country still needs minor repairs and maintenance. Petramala says the average age of homes in Canada is also falling, which isn’t surprising given the amount of new construction that has hit the market in recent years.

Economists are also forecasting Canada’s housing market will slow, despite a surprisingly strong summer, particularly in large cities such as Toronto and Vancouver.

“Despite the focus on the high absolute level of household indebtedness, it is apparent that households in Canada have shifted towards greater thrift,” Preston wrote. “This trend suggests that households have been taking action to improve their longer-term financial prospects.”

Construction Jobs Could Be First Victims Of ‘Unbalanced’ Economy

All those construction cranes dotting the Toronto skyline might be evidence of an economy that has a serious problem, writes BMO Capital Markets’ chief economist Doug Porter.

“This is simply the most glaring [example] of how Canada’s unbalanced monetary policy — rates too low, currency too high — is affecting the economy. Note that in the 1990s, when the currency was too low and rates were too high, construction wallowed for a decade,” Porter wrote.

But what’s so bad about having a lot of construction jobs? For Porter and some other economists, the worry is that the present rate of building is unsustainable, and when the industry gets back to normal, there will be job losses.

“Any time you get to extremes on almost any measure of the economy, you have to start asking serious questions,” Porter told the Wall Street Journal. “Has something fundamental changed to justify this, or is it an accident waiting to happen?”

« Toronto’s Housing: Up in the Clouds, Literally and in Price
China firm takes stake in Brooklyn real estate project »