An Ottawa woman says she was shocked to learn the condo she was selling online was also being offered on another website at a deeply discounted price, part of a complicated scam targeting unsuspecting home buyers.

She then noticed a nearly identical ad — with the same digital photos she had used on her advertisement — on another real estate website.

“I was shocked… because I first heard of it, then I got an email from just a person that had noticed the two listings,” said Gutteridge.

Police investigators have seen a number of fraudulent websites targeting potential home renters, particularly people coming from far-away cities. But for someone to attempt to sell a home that he or she doesn’t own is rare and particularly involved. 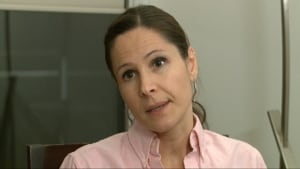 Ottawa resident Julie Gutteridge said the duplicate ad claiming to sell her condo may have hurt her chances of legitimately selling the property. (CBC)

“They are duplicating the ad, but drastically reducing the asking price, and that’s what seems to jump out at legitimate homebuyers. They see, ‘Wow, look at the price of that home and it looks good,'” said Noonan.

The key to the confidence game is a reliance on both the desire of a homebuyer to get a good deal, and pressure from the supposed seller to close the deal quickly, says Noonan.

CBC Ottawa’s Simon Gardner learned this first-hand when he called the number on a duplicate advertisement for a different home — in Orleans, and listed in a duplicate ad for $129,000, or less than half the actual price.

Gardner identified himself as “Andrew Gardner” and created a plausible back story after CBC News determined a journalist would be unable to understand how the seller’s operation worked if he called and represented himself as such.

The man who picked up the phone identified himself as Paul — a name CBC News assumed was fake — and said he couldn’t meet Gardner in person because he was in Toronto with clients.

He claimed he was selling the home at a discounted price because he was under financial stress and needed money fast, but offered assurances that the home had not been a grow-op.

“Actually we do need some money urgently and there is no lien on the house, the house is paid for and it’s going really quick. I have a couple of other interested buyers,” Paul said.

He said in order to close the deal, Gardner would have to deposit $12,000 in a bank account. The man then said his lawyer would contact Gardner with details about the transaction. The man also provided a link to the website of a Toronto law firm specializing in real estate.

Checks with the Law Society of Ontario reveal the firm doesn’t exist, and the phone numbers listed on the website are not active.

But nevertheless, Gardner was sent official-looking purchase documents asking him to wire his deposit into a Royal Bank account in Brampton, Ont. The account does exist, but it is unclear whether the account holder is involved or is an unwitting victim in a confidence scam.

Noonan said tracking the suspected scammer is difficult, particularly if operating outside Canada.

“The internet service providers, we don’t seem to be able to track down. Our suspicion is that it’s not even originating from within Canada and with a money wire service. Once that money leaves the country, it can be retrieved anywhere in the world,” he said.

Gardner made repeated efforts to meet with Paul, as well as his lawyer, to try to close the transaction in person, but was met with a series of excuses. After weeks of back-and-forth emails, text messages and phone calls, Gardner identified himself as a reporter and said he was investigating a potential real estate scam.

‘How do you sell a house you don’t own?’

“What scam is that, I don’t get you,” Paul replied.

At that point, the phone went dead, and Gardner received a text a short time later.

“Nice try Andrew (Simon) you are a good scam baiter,” the text read. “Pls lets drop everything. I am leaving this stupid job. I got forced into this lifestyle.”

It’s not known if anyone has fallen for this kind of fraud, but Gutteridge feels it may already have hurt her chances of selling her place.

“They may assume what I have on Grapevine is a scam or [may] not be comfortable moving forward with anything,” she said.

Noonan said homebuyers should be wary of suspiciously low price homes when the supposed seller never has time to meet. As for home sellers, he said the best you can do is keep an eye on real estate websites to ensure your ad hasn’t been duplicated.

This Beautiful Detached Brick Bungalow Is Situated In A Prime Leslieville Neighborhood. Comes With Garage And Good Size Lot. Potential For A …

Unique Opportunity! Century Old Home W/Plenty Of Character & 6 Bedrooms Ready To Be Brought Up To Its Full Potential. 2280 Sq/Ft Of Living Space (Not …